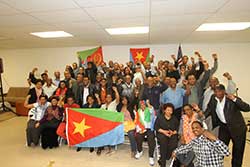 Asmara, 06 May 2014 – The members of the PFDJ branch’s in the Central and Western USA conducted 2nd annual conference in Chicago city last weekend.

Asmara, 06 May 2014 – The members of the PFDJ branch’s in the Central and Western USA conducted 2nd annual conference in Chicago city last weekend.

The meeting in which members of the People’s Front from 8 cities took part witnessed assessment of previous conferences and scrutiny of various team-based activities, especially relations with communities with higher emphasis on youths in a bid to popularize cultural values.

Speaking at the meeting, Mr. Dawit Haile, Head of Youths and PFDJ Affairs in the Eritrean Embassy in the US, noted the importance of human resource development in connection with reinforcement of the Front, and outlined the work plan for this year.

Mr. Berhane Gebrehiwet, Charge’d Affairs in the Eritrean Embassy in the US, on his part gave briefings focusing on the objective situation in the Homeland and the region, in addition to the strengthening of organizations. A seminar was also conducted as regards the importance and role of leadership, as well as conflict resolution.

The participants of the conference exchanged views on various issues, including that of adding fervor to the 40th Anniversary of Bologna Festival.

In this connection, the Eritrea community members in Washington DC and its environs celebrated the 16th anniversary of the launching of the community radio “Dimtsi Ertra.” Dr. Tesfai Aradom presented a research paper focusing on the impact the radio is making on children.