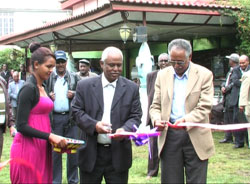 The branch of the Sports Commission in the Central region conducted symposium yesterday in Asmara with a view to scrutinizing children’s football activities among grassroots level.

Asmara, 10 May 2014 – The branch of the Sports Commission in the Central region conducted symposium yesterday in Asmara with a view to scrutinizing children’s football activities among grassroots level.

In the assessment meeting in which senior government officials, sub-zonal Administrators, veteran sportspersons and sports societies participated, the Administrator of the region, Maj. General Ramadan Osman Awliyai, inaugurated a pictorial exhibition depicting sports activities at grassroots level. He further noted the vitality of investing on children’s sport as a far-reaching vision, and indicated that a 2-year training conducted in line with this principle has borne an evident outcome.

Accordingly, the putting in place of a Foot Ball School in Asmara has been approved by FIFA.

Mr. Endirias Asmerom, Head of the branch office, stated on his part that grassroots children sports activities were launched on March 2012 comprising more than 4,000 children aged between 6 and 12 years. He further pointed out that it was given impetus by sub-zonal sports festivals, thus giving rise to the nurturing of competent athletes.

A number of study papers were presented at the symposium, and the participants exchanged views as regards several issues. Moreover, the Minister of Labor and Human Welfare, Mr. Kahsai Ghebrehiwet, received souvenir from the Administrator of the Central region for playing key role in popularization of grassroots-based children’s sports activities.