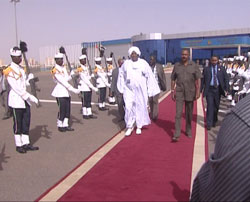 President Isaias Afwerki returned home yesterday, May 10, concluding a 3-day official working visit to the Republic of the Sudan.

Asmara, 11 May 2014– President Isaias Afwerki returned home yesterday, May 10, concluding a 3-day official working visit to the Republic of the Sudan.

The President was seen off at the airport by the Sudanese First Vice President Mr. Bakri Hassan Saleh and other senior Sudanese Government officials.

Speaking at the airport President Isaias Afwerki said that the visit has been solely a working visit and had nothing to do with politics and diplomacy, and that the agreements that have been reached by the two sides are on implementation stage.

In the course of the working visit President Isaias held discussion with President Omar Al-Bashir aimed at strengthening the existing bilateral relations and mutual cooperation. They also discussed on enhancement of the economic ties of both countries, besides ensuring peace and stability along the common border.

It is to be recalled that the President visited currency and official documents printing press, oil refinery and gold processing plant, and received briefings by the experts and officials of the different institutions.