“Victory would be a matter of months” Part I 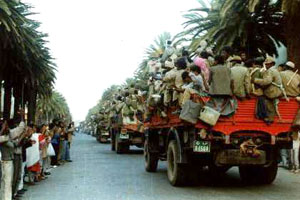 Asked about what it would take for the total liberation of Eritrea after the decisive Fenkil offensive and the annihilation of the enemy from the Port city of Massawa, President Isaias Afwerki, then Secretary General of the EPLF, said that “Victory would be a matter of months”. By all means of calculation and the damage inflicted upon the enemy forces during the consecutive offensives of the liberation fighter it had been inevitable that the enemy had no power or the will to resist the advance of the EPLF fighters.

The Derg regime with heavy assistance by the then superpower, the Soviet Union, had been able to launch eight major offensives, between 1978 and 1986, to crush the Eritrean revolution once and for all.

The much anticipated offensive on the part of the Derg regime had been that of the sixth offensive, in their term the “Red Star”. Within more than two years of preparation to conduct the operation the regime fielded more than 90,000 troops, sophisticated heavy weaponry, modern fighter jets and above all direct military advice from Soviet generals. Thus the sixth offensive was launched on 15 February 1982.

This huge offensive had been crushed by the gallant liberation fighters and with that the morale and apatite of the enemy to continue fighting had been totally collapsed. On the contrary, the morale of the liberation fighters reached to its highest stage. Every one had been convinced that from this day on no force would stand to confront the advance of the revolution to route out the enemy from the country and liberate the nation. The offensives that came after the huge sixth offensive were only desperate actions on the part of the Dreg regime in an attempt to try to reverse the situation if possible. However, they were to no avail and only to receive more heavy blows and causing more deaths of its soldiers and loosing more weaponry.

After the end of the eight successive failed offensives of the Derg the EPLF leadership had been convinced that from this onward it would be the turn of the revolution to take measures in its own hands and initiate operations its own where and when deemed necessary.

One of the first offensives initiated by the EPLF forces has been the renowned operation for the demise of Nadew Iz. The Command had fortified its tranches in the front for solid ten years without doing any thing to fulfill its mission and finally to be demolished itself at the hands of the Eritrean People’s Liberation Army on March 17, 1988. The enemy had strong confidence on the command that it was capable to destroy the liberation forces and take over its Nakfa stronghold. But to its surprise it has been unhilated in a matter of few days.

From this decisive operation the EPLF captured and armed itself with BM rocket launchers, 13 mm guns and other heavy and light ammunitions and vehicles. Thousands of Ethiopian soldiers including three Soviet military advisors were taken prisoners.

The victory at Afabet further solidified the power of the EPLF both in weaponry and morale of its fighters. The operation had taken the world by surprise and the major media outlets of the world began to talk about the operation in particular and the struggle for Eritrean independence in general. With this operation the Derge regime was defeated both militarily and diplomatically for the EPLF became a head line in many media and international forums.

The Demise of Nadew Iz has been the turning point in the armed struggle for Eritrean independence and it has been a matter of time that the sooner Eritrea and its people would be free from the yokes of colonialism and the enemy routed out from the country once and for all.