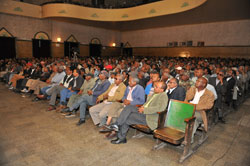 A nationwide seminar as regards the objective situation in the Homeland is being conducted at all levels in regional Administrations, Ministries, the EDF and government as well as PFDJ institutions.

Asmara 17 May 2014- A nationwide seminar as regards the objective situation in the Homeland is being conducted at all levels in regional Administrations, Ministries, the EDF and government as well as PFDJ institutions.

Various issues are being discussed in the seminars such as that of the objective situation vis-à-vis the nation-building process, the external conspiracies weaved against the nation over the past 15 years and the resistance thereof, diplomatic activities and partnership, as well as reinforcement of PFDJ political activities, among others.

A paper issued for discussion by the People’s Front and entitled “Seminar No. 1/2014” indicates the cherished national goals, taking to consideration future generations, is aimed at ensuring a prosperous and developed country, as well as nurturing challenging psychology and united people, besides creating a civilized and participatory political system vis-à-vis equitable economic development. Accordingly, the fact that the Eritrean people are in a position to register remarkable development accomplishments in line with these goals despite the external conspiracies, the nation witnessed over the past 15 years attest to their steadfastness, in addition to Eritrea’s power as a country.

The forum also indicated that the hostile acts the Eritrean people faced just after 7 years of national independence are basically the outcome of Washington’s wrong policy in the region, and that various entities who took the USA’s sides supported and contributed to this, while the TPLF acted as a substitute at the front. The document underscores that although the multi-colored act of conspiracy to some extent gave rise to harm, it ended up in fiasco thanks to the staunch resistance of nationals inside the country and abroad. In this connection, the endeavors being exerted by the EDF and the people targeting development of the national economy have borne a move to new stage of growth in spite of the encountered quandaries as a result of the Government’s cautious investment in key sectors and effective utilization of resources.

Pertaining to diplomatic domain, the paper highlighted that the dreams of enemy quarters have ended up in utter failure and the secrets of the sanctions perpetrated against Eritrea exposed

as an outcome of the steadfastness of the Eritrean people and their leadership, thus revealing the nation’s growing relations and constructive role, as well as dignified stance. Subsequently, an emphasis was made on the need to maintain the achievements registered and striving for still more gratifying ones, reinforcement of the PFDJ’s political activities, safeguarding popular harmony, enhancing the role of citizens in State affairs, developing the capacity of Administrations and leadership, as well as easing negative instances, besides creating more training, employment and other opportunities for youths.

The seminars witnessed open discussions on the part of the participants, in the course of which it was stated that such forum was one of the secrets behind the victory of the EPLF. The seminar participants further called for continued efforts in a bid to keep intact positive sides and address shortcomings timely.

Reports disclosed that the discussions dealt with political and economic dimensions of the nation-building process, raising leadership capacity, improvement of people’s livelihood, mounting resistance against external conspiracies and expanding various opportunities for the youth. Various seminars are expected to be organized following the ones that are based on the first paper.