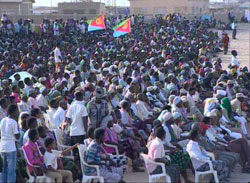 The 23rd Independence Day was marked with zeal at regional level in Tio, Southern Red Sea region, under the theme “We Toil Today for a Bright Tomorrow.”

Assab, 17 May 2014 – The 23rd Independence Day was marked with zeal at regional level in Tio, Southern Red Sea region, under the theme “We Toil Today for a Bright Tomorrow.”

Representing the regional Administrator, Mr. Humed Ali, Head of social service in the Southern Red Sea region, pointed out that the nation is in a position to lay reliable groundwork for higher development over the past 23 years despite the challenges it encountered. He further indicated that such accomplishment is an outcome of the people’s unity and steadfastness, and said that they would remain persistent thereof.

Also speaking on the occasion, Mr. Isa Ahmed, Chairman of the Holidays Coordinating Committee in the region, lauded all those who made significant contribution as regards organizing the event.

Moreover, Mr. Saleh Mohammed who departed from Agordat city and crossed Anseba, Central and Northern Red Sea regions on foot trek in connection with Independence Day was accorded warm welcome in Tio in coincidence with the event. He also received an award from the Sultan of Rahayta, Derder Abdulkadir Dawood.

Various cultural performances were staged in the event.

Indoor and outdoor cultural performances continue in Asmara with zeal