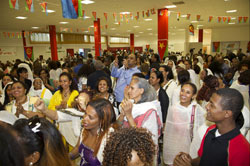 The Eritrean community members in Milan and its environs, Italia, celebrated the 23rd Independence Day anniversary with higher patriotic zeal.

Asmara, 20 May 2014 – The Eritrean community members in Milan and its environs, Italia, celebrated the 23rd Independence Day anniversary with higher patriotic zeal.

Speaking on the occasion, Mr. Russom Gebregergis, Eritrean Consul in Milan, said that the event is an occasion when nationals should reiterate readiness to honor the trust of martyrs. He further called for higher community awareness as regards the ongoing national endeavors towards nurturing a powerful nation and reliable economy, besides noting the need to inspire communal awareness regarding culture and State affairs, including that of mounting staunch resistance against external conspiracies.

Also speaking on the event, Mr. Girmai Habtemichael, Head of Public and Community Affairs in the Eritrean Embassy in Italy, gave extensive briefings as regard the 40th Anniversary of Bologna Festival which is due to be celebrated from 4 to 6 July in Bologna city. He also stated that community members are due to demonstrate sustained efforts in connection with the preparations being made to organize the event.