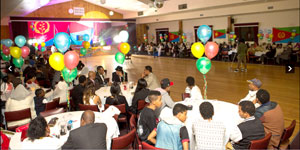 Speaking on the occasion in which various nationals residing in the city and its environs took part, Mr. Yasin Omer, in charge of the Eritrean Consul General in Australia and New Zealand, expressed satisfaction with the manner Independence Day is being celebrated by nationals inside the country and abroad.

Representatives of the Australian Government, mining companies operating in Eritrea and Fred Hollows Intra-Ocular Laboratory, as well as friends of the Eritrean people lauded the nation’s pace of development.

Moreover, Ms. Sofia Tesfamariam, gave briefings focusing on the objective situation in the Homeland vis-à-vis the unjust UN Sanction resolutions, in addition to the Eritrean people’s resolve against external conspiracies.

The celebration would continue in the rest Australian cities and New Zealand.