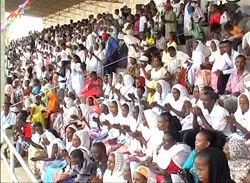 The 23rd Independence Day anniversary was celebrated on 22 May at regional level in Massawa.

Massawa, 23 May 2014- The 23rd Independence Day anniversary was celebrated on 22 May at regional level in Massawa.

During the occasion in which senior government and Front officials, Army Commanders, as well as invited guests participated, Ms. Tsegereda Woldegergis, Administrator of the region, indicated that high price have been paid for independence and national sovereignty,  as a result of which commendable achievement has been registered through strong participation of the public.

Ms. Tsgereda further said that thanks to committed efforts on the part of the Government and Eritrean people, the country is marching towards higher economic development. She finally called on citizens to reinforce participation in the national development programs.

Mr. Siraj Haji, Director of Culture and Heritages in the region, said that this year’s theme has been a reminder of the unremitting efforts being exerted for the success of national development programs. He commended different institutions for the contributions they made towards colorfully celebrating Independence Day anniversary.

The celebration has been witnessing different cultural shows depicting the history and struggle for independence and national sovereignty.