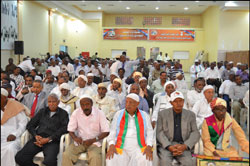 Asmara, 23 May 2014- Eritrean community members in Jeddah and its environs celebrated the 23rd Independence Day anniversary with patriotic zeal.

of congratulation to Eritrean nationals living inside the country and abroad and its Defense Forces. He said that this year’s Independence Day celebration is unique for it is being observed at a time in which the country is bearing the fruits of its staunch resistance.

He further explained that the Eritrean people have been mounting strong resistance against the illegal sanctions, and that promising diplomatic and political achievements are being registered.

According to Mr. Abdurahman Osman, Consulate General at the Eritrean Embassy in Jeddah, the celebration has been colorfully conducted featuring music performances by Sudanese singers and Hidri cultural troupe as well as sports activities.