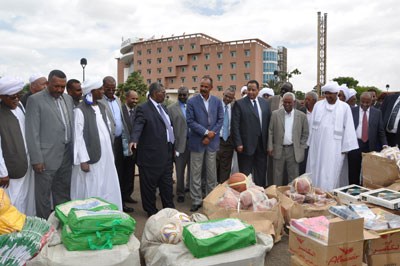 The Administration of Sudanese Red Sea region donated on 25 May sports materials to the ministries of Health and Education as well as the Sports Commission.

Asmara- The Administration of Sudanese Red Sea region donated on 25 May sports materials to the ministries of Health and Education as well as the Sports Commission.

During the occasion that took part at the Asmara Palace in the presence of President Isaias Afwerki and Prof. Ibrahim Gandur, Vice President of the Republic of Sudan, and other senior officials of the two countries, it has been indicated that the donation has been the continuation of the cooperation existing between the two countries.

Ms. Askalu Menkorios, Minister of Tourism, point out that cooperation agreements have been signed between Eritrea and the Sudan in the sectors of investment, culture, health, education as well as others, and that the exchange of visits between the two countries on special occasions has been part of the agreements.

Prof. Ibrahim Gandur indicated that they have come to participate in the 23rd Eritrean Independence Day celebrations conveying congratulatory message from President Omar Al-Bashir, President of the Sudan.

Mr. Mohammed Yosuf, Administrator of Kassalla region, on his part appreciating for the warm reception they have been accorded, and expressed conviction that the cooperation that has been existing between the two countries would be strengthened.

During the occasion lunch reception has been organized to the Sudanese delegation at the Asmara Palace.

Asmara ‘bella’ in May