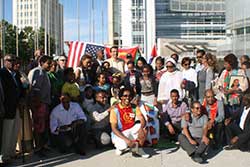 The Eritrean community members in the US cities of San Jose, Denver, Oakland and Atlanta celebrated the momentous Day with patriotic zeal. The event witnessed participation of nationals and friends of Eritrea, while cultural performance were staged portraying the prevailing harmony of the Eritrean people, in addition to their steadfastness and the development achievements being registered in the Homeland. In this connection, May 24 has been registered in San Jose city’s calendar as the National Day of Eritrea and the Eritrean flag would hoisted in the city until May 30.

The community members further asserted readiness to step up participation in State affairs and to mount staunch resistance against external conspiracies on the basis of higher organization.

Likewise, the Eritrean community members in Bahrain, Angola, Zimbabwe, Namibia, Zambia, Norway, Austria and the Republic of Sudan marked Independence Day with various activities and said that they would enhance role in community and State affairs.

Speaking at the ceremony in South Africa in which the Minister of Justice, Ms. Fawzia Hashim was present, Mr. Saleh Omar, the Eritrean Ambassador to South African and the southern African region, stated that the Eritrean people are as usual ready to foil anti-Eritrea agendas. He also said that major development projects are being put in place in the Homeland with a view to ensuring economic stride at grassroots level.