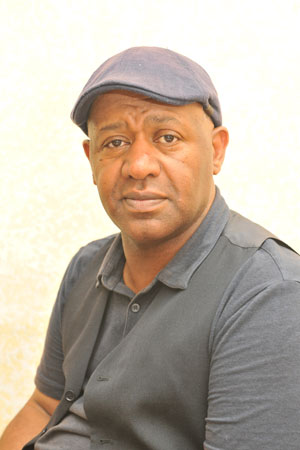 He fled his country in 1975 with his parents at his teen age fleeing the brutal and indiscriminate killing of innocent Eritreans by the Derge regime. He stayed for two years in the Sudan and in 1977 he went to Germany. Currently he is residing in the UK and working at the Eritrean Embassy as head of media. In every major events in the country he comes with different cultural troupes and renowned singers from different countries to celebrate the event with his people. Shabait.com had the opportunity to have an interview with him.

-We would like to thank you for your being with us for this brief interview. Tell us about yourself.

My name is Yared Tesfai. I was born in Asmara in 1965. I took my elementary education (up to 3rd grade) at the then American School in Asmara. 1975 had been the year during which the Derg regime came to power and started indiscriminate killings of innocent Eritreans simply because they were Eritreans. Hence, my parents decided to flee the country to seek refuge in the Sudan. I was then 15 years old teenager. We stayed in the Sudan for about two years and in 1977 we went to Germany. It was here that I continued my formal education.

-How and when did you happen to join music?

Along side my college education, I took formal music education at the Pelikan Music School in Hamburg majoring Saxophone Alto. When we arrived in Germany in 1977, there were no Eritreans of my age in the city I had been living. But in 1980 many Eritrean youngsters started coming and I found the opportunity not only to exercise my language but also to form a music group and practically experience the music I learned at the music school. It was then that we were able to form the Red Flowers (Keyahti Embaba) cultural troupe in Diaspora. This cultural troupe had been instrumental in raising the awareness of the Eritrean people. The cultural troupe had not been confined in playing music but also had been conducting political, cultural and social education among the members and other Eritrean youth in the area aimed at strengthening our attachment with our culture and societal values as well as raising our awareness on the ongoing national struggle for our independence.

As time goes on we went more matured and started thinking on how we could contribute in our capacity to the Eritrean struggle for independence. That was when we stared making contacts with similar revolutionary groups aimed at spreading our cause and at the same time collecting items we think could be of help to the struggle. And with that we have been successful and many youth of other countries in the areas we have been living came to know and understand the Eritrean struggle for independence.
What progress did you make with your cultural group?

We had the chance, for the first time, to perform music at the Bologna Eritrean festival in 1980. Here we had the chance to get recognition by many Eritreans who participated in the festival. From here we were able to conduct a tour to several countries in Europe promoting the Eritrean cause among Eritreans and other people interested in our cause.

In 1981 we have been invited to go to the US as part of our tour in Europe. That was when we met some of the senior leaders of the EPLF. I could not tell you how I felt the fact that I happen to meet face to face with the people I only knew by their names. It had been an opportunity only few of my age could find.

In 1984 a big music competition had been organized in Europe. In this music competition different Eritrean renowned musicians and singers took part. For example, from Italy Tekle Hiwket, from Sweden Ibrahim and Arefaine Gebru, from Holland Habtemicael Gebremicael came to perform. And we as a group got the chance to participate in the show. At the end of the show a cultural troupe ‘Mekaleh Eritrea’ has been officially established under the umbrella of the EPLF. And I became part of it.

In 1988 I got the chance to come to the field and have more experience about the daily life of the liberation fighters and have discussions aimed sharing experience with the cultural troupes that have been established in the field. That had been huge experience for me. And that also created for me huge motivation. Three years later, in 1991, right some months after Eritrean independence I came to my beloved country after 16 years with ‘Dahai Eritrea’ cultural troupe to express our joy with our people.

-Let’s go to another issue. Every year during Independence Day celebrations you are here with different music groups and renowned singers. What motivates you do that?

As I told you, I am working as head of media in the Eritrean Embassy. My occupation allows me to have contact with different individuals in different countries. My profession as a musician also gives me the opportunity to know many musicians and singers. So far from 2004 on wards I had invited several musicians and singers to join our Independence Day celebration. To mention but few, Fulani from Germany, UMOJA from South Africa, Crane Performers from Uganda, Crown Nkula Africa from Uganda, Charlotte Khoza from South Africa, the Nazrawian Cultural groups, and renowned singers Jackie Chadurie from Uganda, Ms. Jojo from Rwanda, TikenJah Fakoly from South Africa have come to Eritrea to join our Independence Day celebrations.

-What about Eritrean singers?

You know, there are around 82 Eritrean singers known as Eri-Artista fully engaged in international music and film industry. All of them are eager to join our festivities, but with all the logistical challenges we could not invite them all. So far people like, the EriAm Sisters, Winta Efrem, Betty Zere, Rahel Ghile, Helen Tesfazgi, Hermon Rezene have come to celebrate our Independence Day with us in Eritrea.

-Yared, could you tell us on your future plan?

Inviting different artists to join us in our Independence Day celebrations would continue. And, actually it is in its infant stage, we have in mind to organize massive concert in Eritrea in which different artists from all over Africa would participate. The aim of the concert is to show the wide world through the eyes of the artists the peace and stability prevailing in Eritrea, the progress the country has achieved within the short years of independence under the theme of self-reliance.

-Any thing you want to add?

I would like to convey my sincere thanks to the PFDJ cultural affairs, NAS-Air, Foreign Affairs Ministry and the Ministry of Information for the help they provided me through out those years.