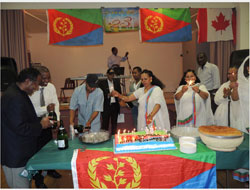 The Eritrean community members in the Canadian cities of Saskatoon, Calgary, Vancouver, Edmonton and Kitchener celebrated the momentous Day with enthusiasm.

The ceremonies witnessed the staging of cultural performances depicting cultural values of the Eritrean people and the right image of Eritrea.

Members of the communities asserted readiness to step up participation in State affairs and to mount staunch resistance against external conspiracies, besides to strive to portray the right image of Eritrea through higher communal organization.

They also noted the heaviness of the all-round sacrifice paid for national independence and reiterated readiness to sustain input in national development activities.