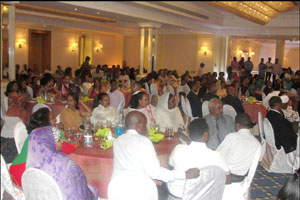 The Eritrean community members in Dubai and various German cities celebrated Independence Day with patriotic fervor and a manner that depicted the Eritrean culture as well as community harmony.

Asmara, 31 May 2014 – The Eritrean community members in Dubai and various German cities celebrated Independence Day with patriotic fervor and a manner that depicted the Eritrean culture as well as community harmony.

Speaking at the ceremony in Dubai in which a number of diplomats and invited guests took part, Mr. Jemal Abdalla, Head of consular and community affairs in the Eritrean Embassy in the UAE, pointed out that the nation has become a target for continued hostile activities of varied forms just as a manifestation of the hostile quarters’ attempts to undermine its independent political path.

He further stated that such hostile activities have ended up in fiasco thanks to the steadfastness of the Eritrean people inside the country and abroad.

Representing the Eritrean community in Dubai and North Emirates, Mr. Fuad Mohammed said that the specialty of the event lies on the fact that it is being celebrated at a time when the unjust UN sanctions resolutions has been foiled. He also expressed conviction that the Eritrean people would remain persistent to put an end to enemy attempts targeting national identity.

Cultural performances were staged by Aser Cultural Troupe in the ceremony.

Meanwhile, the Eritrean community members expressed resolve to enhance role in State affairs at the respective ceremonies in connection with the momentous Day which witnessed the staging of various activities and higher participation of youths as well as children.