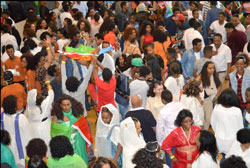 The Eritrean community members in Switzerland and Qatar have celebrated the 23rd Independence Day anniversary with zeal.

Asmara 02 June 2014 – The Eritrean community members in Switzerland and Qatar have celebrated the 23rd Independence Day anniversary with zeal.

Speaking at the ceremony in Doha city in which the representative of  the Qatari  Foreign Ministry, Ambassadors and diplomats of various countries, as well as various nationals took part, Mr. Ali Ibrahim, the Eritrean Ambassador to the country, expressed appreciation for the pace of the ongoing national development programs being implemented in the Homeland.

Mr. Abdu-Selam Mohammed, Chairman of the Eritrean community in Qatar, asserted the community’s readiness to step up participation in State affairs through proving higher organization.

The event witnessed the staging of cultural performance by a cultural troupe from the Homeland and handing of awards for sports teams that won the matches organized in connection with the event.
Likewise, reports indicated that the Eritrean community members in Switzerland marked the momentous Day with patriotic fervor.

Mr. Shleshi Idris, head of the PFDJ branch in Switzerland, delivered message of congratulations in the course of the celebration in which the Eritrean Minster of Labor and Human Welfare, other officials and various nationals took part. He further called on citizens inside the country in general and the community members in particular to mount staunch resistance against external conspiracies on the basis of enhancing organization.

Also speaking on the occasion, Mr. Bereket Woldeyahanes, Executive of Embassy Affairs in the Eritrean embassy in Switzerland, pointed out that the national development drive has gained momentum thanks to the integrated endeavors exerted by the Eritrean people and their leadership. He also urged them to demonstrate enhanced organizational capacity so as to foil anti-Eritrea agendas.