Seminar conducted in Tessenei with a view to promoting malaria control 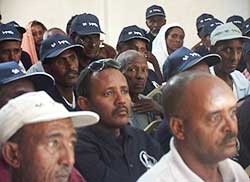 Reports indicated that a seminar was conducted in Tessenei city with a view to promoting malaria control.

Tessenei, 03 June 2014 – Reports indicated that a seminar was conducted in Tessenei city with a view to promoting malaria control.

Speaking at the meeting, Dr. Araya Berhane, Head of Control of Communicable diseases in the Health Ministry, made note of the potential severity of malaria’s morbidity effect in the region, and pointed out that endeavors are being made to ensure full control of malaria following the achievement registered targeting great slash in its instances.

Mr. Selam Mihretab, Head of malaria control in the Ministry, stated on his part that communities are engaged in eradicating potential mosquito reproduction sites in line with popular environmental hygiene initiatives and with raised awareness. He further called for sustainability of such communal input.

Moreover, Mr. Afewerki Araya, Head of malaria control in the Health Ministry’s branch in Gash-Barka region, said that the inhabitants should adhere to eradication of swamps and constant use of mosquito nets. He also called for enhancement of the integrated efforts between communities and government bodies for the realization of the cherished goal.