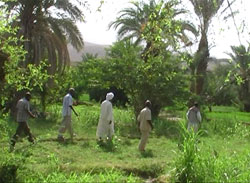 The Administrator of Anseba region Mr. Ali Mahmud has conducted a tour of development projects in Asmat, Kerkebet and Sel’a sub-zones.

Keren, 10 June 2014 – The Administrator of Anseba region Mr. Ali Mahmud has conducted a tour of development projects in Asmat, Kerkebet and Sel’a sub-zones. He made the tour so as to observe the social services facilities being rendered to the community members.

The regional Administrator visited schools and health institutions in Asmat sub-zone, and said that the necessary support would be provided to the popular endeavors being made. He also indicated that the required facilities would be put in place for the educational facilities in Asmat Boarding School.

In the course of the tour, he indicated that agreements have been reached with pertinent bodies to facilitate the construction of Sel’a Hospital and distribute 500,000 quintals of cement for the construction of residence facilities, in addition to the putting in place of modern potable water supply facilities in the sub-zone.

Call made for enhanced efforts towards nurturing competent student in Foro