Martyrs Day commemorated with patriotic zeal at home and abroad 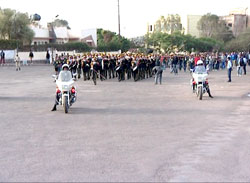 Martyrs Day was today commemorated inside the country and abroad with patriotic fervor under the theme “Commemoration that Reinforces Trust.”

Asmara, 20 June 2014 – Martyrs Day was today commemorated inside the country and abroad with patriotic fervor under the theme “Commemoration that Reinforces Trust.”

The commemorative event at Patriots Cemetery here in the capital was attended by Ministers, senior PFDJ officials, Army commanders, religious leaders and thousands of citizens. The President and senior officials walked to the Cemetery from Shida square beginning at 6 a.m. along with a marching band.

In a speech he delivered on the

occasion, President Isaias, expressed appreciation to the Eritrean citizens at home and abroad for the deep affection and homage they had demonstrated in memory of the Martyrs. He further underlined the glorious legacy bequeathed by the martyrs to fellow citizens.

Stressing the imperative of honoring the trust of the fallen heroes on the part of all citizens, the President underlined that all nationals shoulder the responsibility of exerting the necessary effort to build a prosperous nation.
The commemorative event witnessed the staging of cultural performances.