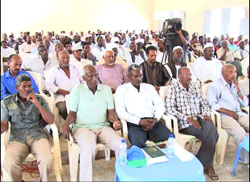 The residents of Agordat sub-zone have rehabilitated a total of 133 children of martyrs in livestock and other forms through raising more than 1,102,000 Nakfa.

Agordat, 20 June 2014 – The residents of Agordat sub-zone have rehabilitated a total of 133 children of martyrs in livestock and other forms through raising more than 1,102,000 Nakfa.

Among the children, 100 being underage, each one of them has become beneficiary of 10,000 Nakfa, while the rest were rehabilitated in livestock worth equivalent values.

Speaking at the ceremony conducted thereof in Agordat city last Monday, Ms. Fatima Idris, Head of social service in the sub-zone, indicated that the beneficiaries of the popular project were identified on the basis of a study conducted by a committee in charge of patronizing children of fallen heroes. She went on to explain that additional study is being undertaken to enable the beneficiaries of financial support for effective utilization, and disclosed that the second phase of the project would focus on rehabilitation of another 32 children of martyrs.

Likewise, Mr. Teklebirhan Gebrewold, Administrator of the sub-zone, lauded all the inhabitants and other nationals for extending financial support to the project and taking initiative to regularly back families of fallen heroes.

Among members of the committee, Mr. Idris Faid Darshih, stated that the fundraising process was initiated in January, and called on fellow members to step up enthusiasm in future undertakings of the project’s second phase.

Residents of Godaif extend support to families of martyrs