Eritrean nationals arriving home to spend vacation in the Homeland 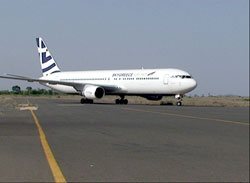 The flight of the Boeing 767 to Eritrea accommodated Eritrean nationals from the Scandinavian countries and other European states. The new service would relieve beneficiaries of the inconveniences they have been encountering, according to coordinators of the arrangement.