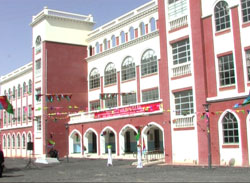 Asmara, 21 June 2014 – The newly constructed Erafaile Elementary School in Arbaete-Asmara sub-zone was inaugurated today. The construction of the 3-storey school at a cost of USD 3.8 million was funded by the Government of the People’s Republic of China in line with the agreement concluded between the two countries.

The inauguration ceremony was attended by Ministers, senior PFDJ heads, branch heads of the Education Ministry, and the PRC Ambassador to Eritrea, Mr. N. Xiang. During the occasion, the Administrator of the Central region, Maj. General Ramadan Osman Awliyai, hoisted the national flag in the school.

Speaking at the ceremony, the Minister of Education, Mr. Semere Russom, conveyed thanks to the Government of the PRC on behalf of the Eritrean Government.

Mr. Semere Russom, Mr. Abraha Asfaha, Minister of Construction, and Maj. General Ramadan Osman Awliyai, handed prizes to Ambassador N. Xiang of the PRC, as well as the Chinese experts who took part in the construction of the school.

Eritrean nationals arriving home to spend vacation in the Homeland