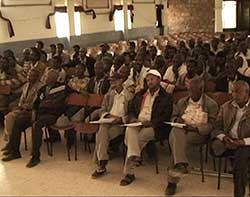 The Association of Fruits and Vegetables Farmers in Dubarwa sub-zone has conducted an annual assessment meeting.

Dubarwa, 25 June 2014 – The Association of Fruits and Vegetables Farmers in Dubarwa sub-zone has conducted an annual assessment meeting.

Speaking at the meeting, Mr. Samuel Amanuel, Chairman of the Association, explained that the Association has a total of 683 members, 37 of whom are females, and that around 480 hectares of land is being put under cultivation.

He went on to state that over 261 thousand quintals of fruits and vegetables have been supplied to market center by the Association, in addition to the credit given to the members at lower interest.

Mr. Debesay Andemariam, head of the Agriculture Ministry’s branch in the sub-zone, called on the farmers to put up more endeavors for still more gratifying outcome, and asserted the branch office’s readiness to sustain collaboration with the Association.

Likewise, Mr. Abraham Teka, Administrator of the sub-zone, urged the association members to strengthen their organization.

The participants of the meeting exchanged views on various issues, according to reports.