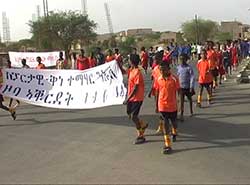 Student Week was conducted in Gash-Barka with higher sprit of enthusiasm among sub-zones of the region.

Barentu, 25 June 2014 –Student Week was conducted in Gash-Barka with higher sprit of enthusiasm among sub-zones of the region.

The 3-day event witnessed the staging of Sports competitions both for females and males comprising football, basketball, volleyball, and Athletics, among others.

Mr. Fisehaye Haile, Administrator of the region opened the Student Week. Speaking on the occasion, Mr. Tesfai Tekie, head of Sport, Culture and Health in the Education Ministry’s branch in the region, noted the vitality of the Week as regards nurturing competent youths, and called on Government bodies and communities to play due role to this end.

Likewise, Mr. Mohammed-Ali Ibrahim, Head of the Education Ministry’s branch in the region, disclosed that such activities make due contribution in the teaching-learning process, and called for organizing such an event.

Mr. Solomon Teklehaimanot, Head of Sports activities in the schools of the region, expressed appreciation for those who made remarkable input in organizing the Week.

Trophy and prizes were awarded to sub-zones that won the competition.