A total of 1,081 students from the Eritrean Institute of Technology graduate with Master’s and Bachelor’s degrees as well as Diploma 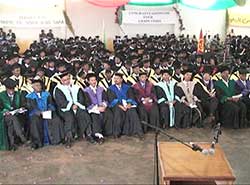 A total of 1,081 students from the Eritrean Institute of Technology in Mai-Nefhi graduated with Master’s and Bachelor’s degrees as well as Diploma.

Asmara, 26 June 2014 – A total of 1,081 students from the Eritrean Institute of Technology in Mai-Nefhi graduated with Master’s and Bachelor’s degrees as well as Diploma.

Reports indicated that the Institute commenced 7th graduation time today, and that a total of 24 and 563 students graduated with Master’s and Bachelor’s Degrees so far, while 494 others have earned Diploma from the Institute.

Speaking at the graduation ceremony as the Guest of Honor, Mr. Arefaine Berhe, Minister of Agriculture, stated that the Government of Eritrea is working on priority basis in a bid to promote educational outreach, and thereby witnessing an impact in promoting social and economic development through education.

He went on to indicate that the higher number of graduates being shown annually attests to the soundness of the government’s policy and strategies in connection with education, and called on the graduates to prove higher participation in national development programs.

Likewise, Dr. Tesfamichael Haile, Vice President of Academic Affairs in the Institute, pointed out that its mission targets the nurturing of dynamic students in line with the nation’s human resource development scheme which seeks the realization of the cherished national development goals.

He also expressed appreciation for the endeavors being made by the government and its stockholders as regards human resources development.

A representative of the graduates on his part asserted the batch’s readiness to step up participation in national development programs on the basis of developing the knowledge they have acquired through work experience.