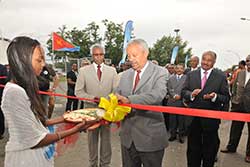 The 40th Anniversary of Bologna Festival opened today and inaugurated by Mr. Woldenkiel Abraha, Minister of Local Government. The event witnessed the participation of many nationals residing abroad.

Asmara, 04 July 2014 – The 40th Anniversary of Bologna Festival opened today and inaugurated by Mr. Woldenkiel Abraha, Minister of Local Government. The event witnessed the participation of many nationals residing abroad.

The opening ceremony was broadcast live by Eri-TV, Dimtsi Hafash and FM channels of Numa, as well as Zara. Eritrean Ministers, Senior PFDJ officials, Ambassadors and Heads of national Associations also took part in the event.

Speaking at the opening ceremony, the Eritrean Ambassador to Italy, Mr. Zemede Tekle, said that the extended preparations for the event were successful thanks to the youth participants who were children at the time of the Festival’s commencement. He further pointed out that this attests to the accomplishment being registered in connection with bequeathing national values to the youth, and lauded the role played by Eritrean communities as well as the Municipality of Bologna city in organizing the significant event.

Mr. Yemane Habtemariam, Chairman of the Eritrean community in Bologna city and its environs, on his part welcomed the participants and wished good days of celebration. Furthermore, Mr. Tedros Goitom, member of the event’s coordinating committee, explained the event attests to the prevalence of national values across generations, and that such societal responsibility constitutes groundwork for triumph against the current challenges of the nation.

A number of cultural performances were staged by a Cultural troupe from the Homeland.

According to the event’s coordinating committee, the participant nationals from various cities of Italy, Germany, UK, Holland, Norway, Sweden, Denmark, Canada, USA, the Middle East and other areas arrived in Bologna starting from last Tuesday.

The event is due to witness the staging of cultural activities, seminar by Senior envoy from the Eritrean government, various seminars, exhibition, forum, community camps and children’s programs, among others.

Meanwhile, the 40th anniversary of Bologna festival was celebrated in Asmara city by the then participant nationals, members of the Eritrean movement for liberation in Italy and Eritrean mothers residing in that country.

Mr. Haile Asfaha gave briefings regarding the significance of the event and performances by Aser Cultural Troupe added color to the meeting.