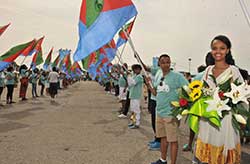 Bologna- a hub of Eritrean gathering, a center of mutual understanding, a platform where every national from different corners of the world flocked to discuss matters of national issues, is marking 40th anniversary of Eritrean festival that started during the colonial era. Many Eritreans consider Bologna city as their second home for it enabled them to sit together and discuss topics that are of paramount importance and for it was almost the only place outside of Eritrea where all nationals sheltered inside the same roof that is filled with Eritrean national spirit and where all national sentiments united.

Bologna was not only a center for festival, but it was a center where cultural, political, historic and above all national sentiments were reflected in true image through unremitting efforts of Eritreans all over the world. It was indeed a venue where all nationals shared updated information about the development of the struggle for independence.

The unyielding perseverance of Eritreans in the Diaspora and their attachment to their homeland makes them ambassadors of their nation and backers of the then active struggle for national independence.

Except to the people of Eritrea who were forced to bear the ordeals of colonialism, the struggle for independence was a forgotten history to a vast area of the word. It is in such occasion that Eritrean festival in Bologna became a center that reflects the true demand and commitment of all Eritreans to their national independence. This festival knocked the doors of some media outlets who were not willing or else that were reluctant to give coverage to the Eritrean cause and made them learn what genuine national sentiment looks like.

In July 1986, for instance, a monthly magazine of Bologna City (Mensile Dell’Administrazione Communale) published a special edition about Eritrea (Dossier Eritrea: Pagine 34-37). Thus, in connection with the Eritrean international festival that was about to be held from August 2-7 of 1986, the Italian magazine presented summarized facts about recurring challenges in Eritrea.

In its special coverage, the Italian magazine highlights about the gradual political developments that occurred following the end of Italian colonialism, that is, since early 1950s. How Eritrea was forcefully annexed to an Ethiopian rule through intervention of the then super powers, how an advanced and democratic Eritrean administrative system was replaced by a far primitive and imperial Ethiopian system are among the topics raised in this publication.

The magazine also depicts that despite continuous cry of an Eritrean delegation to the United Nations, the world turned a blind eye to any call made by Eritreans and thus it became a cause for the birth of an armed struggle for independence. Besides, it narrates imprisonment, massacre, and migration of thousands of Eritreans.

The magazine further discussed about direct military support of Soviet Union to the Ethiopian colonial rule, victories achieved by EPLF following some years of standoff, how the Ethiopian colonial rule used food aid as a means to achieve its vested interest during a period of famine that occurred in Ethiopia and Eritrea between 1984 and 1985, attempts of cultural hegemony through banning official Eritrean languages and replacing them with Amharic, the establishment of Eritrean Rehabilitation Association (ERA) and the role it played in distributing food aids to those in need, effective governance and advanced administrative capability of EPLF which was effective in strengthening national consciousness, and also the gradual change of attitude towards the just cause of Eritreans by a number of European countries.

Festival Bolognia was indeed a mouth piece of the Eritrean people. The Italian magazine puts as a conclusion to its special coverage about Eritrea as follows:

There are a number of migrant Eritreans among us who flee from their country due to the ongoing war and oppression of the colonial rule. Despite the harsh situation they are in, Eritreans have pragmatically proven their adherence to their culture, the strong attachment they have with their homeland as well as their cherished desire to return to their country. Relaying on themselves, they have been fighting for 25 years without any external support and they are relentlessly working to make their voice heard and we are, at least, obliged to hear them.

The magazine further continues its remark saying “To reassure their support to their national cause and their right to self-determination, Eritreans are, as usual, going to host a festival of Eritrean gathering from 2-7 August 1986 in our city (Bolognia) that was formerly known as Quartiere Navile Caserme Rosse.”

The role Bologna festival played in accelerating the pace of the struggle for independence is not to be viewed lightly. As Bologna was a venue for Eritrean gathering in the abroad, Eritreans from different parts of the world used to meet and discuss issues of national concern. All communal committees were then active in organizing events and in giving updates about objective situations in the homeland during the colonial era.

This very festival of Eritreans was then an unshakable link that connected Eritrea and Eritreans in the abroad. It is through this effective connection that a number of projects were implemented in liberated areas of Eritrea particularly through the funds raised by Eritrean communities in the Diaspora.