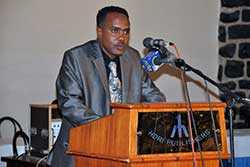 Akedir, by profession you are an Electrical Engineer, how come you become an artist, which I think are very far apart disciplines.

From my early childhood, I think, I had the inclination of writing poems, listening to music and watching dramas. The only thing I lacked was to have the gut taking it as my daily activity. Otherwise art has been inside me for years.

And when did you start writing?

I remember it was in 1994, we took summer training course in literature that has been organized by the National Union of Eritrean Youth and Students. That training helped me develop confidence of my inclination and start producing some art products. I started to write short stories and poems.

You know, some times even if you identify your talent you could loose confidence to pursue it. You feel inside you that am I the right person to do this and that. You need something that motivates and encourage you to follow your instinct. And thanks to the training I took at the NUEYS, I had been encouraged to try practicing the talent that has been buried inside me for years. From 1997 on wards I started writing short stories and articles for newspapers. From this onwards I knew that I could be a writer.

And I heard you were also participating at the national holidays in producing literary materials.

You are also the chairperson of the Eritrean Film Rating Committee.

What is the objective of the committee?

Our main job is to oversee the quality and the messages the films convey to the society. By quality I mean, does the film meet the basic standard of films in terms of picture, light, characterization, editing, etc.? On the other hands we also make sure that the film respects and reflects the good societal values. And those films which meet the standard we set for our rating are given points ranging from half point to three. So far very few films have been able to get 2.5 to 3 points.

The other and main objective of the rating is to help the film industry develop to a desired standard. The points they receive would help the film producer know their standard and ability to produced quality films as much as possible. Those who got lesser points would know the point of their weakness and try to improve them next time. And with that it is our hope the film industry would develop with time.

But it is widely said that, since all the films that are produced are presented to the public from one cinema hall, that is Cinema Impero. Films that got half point are given equal time and space with those films which got 3 points. Where do you see that the rating is encouraging the development of film industry in the country?

Well it is true that all films irrespective of the points they get are shown to the public from one cinema hall. And that might seem the result of the rating makes no difference. In other words, one might ask if the rating is not encouraging those who come out with quality films what is the use of the rating.

The question might seem true but in reality we are observing that the rating is progressively making the difference. The films which are produced are not only for public shows in the cinemas. They are also put to the market, mainly to the Diaspora Eritreans. Those people who buy the films first look to the point the film has been given. The film that is of 3 points is much expensive than the film with half point. This is what we are currently observing practically. And we believe that is the result of our job.

I don’t take that concept. I don’t think books that touch the feeling of the society would lack readers. Literary works that raise issues alien to the society would not get readers. It is said that artists should be the horse that pulls the cart and not the cart that is pulled by the horse. In other words, artists should be the vanguard of the society, they should raise issues that the society could learn and through which they could improve their livelihood and way of living. That is very important in literary works. Moreover, artists, if they want to produce critical works they should make critical research so that they touch widely prevailing aspect within the society, and not minor issues that could not have the attention of the society. They should also respect the good values of the society and try to promote them. For example, Eritrea is known for its peace and tranquility where people could go to a place of their wish at any time without fear of anything. That should be promoted and encouraged.

May be one thing that we could talk about with regards to the negative effect for the development of literary works is the cost of printing press and lack of distribution. The lack of publishers is really affecting the development. A writer should produce literary work, be it a book or short stories, submit it to the publishing agencies and leave the process to them. They would evaluate the book, see to its quality and decide whether to publish it or not. If they feel the book is fit for publishing they publish it and handle the distribution and the writers expects only his dividends. Otherwise if the writer is responsible for writing, publishing, and distribution, it would be tiresome and discouraging. And my wish is to see the establishment of such publishing agencies.

Mr. Akedir I thank you very much for the time you gave me for this interview.

I also thank you for having me!