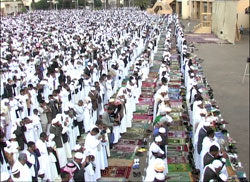 The Eritrean Mufti, Sheik Al-Amin Osman Al-Amin, led the Salat Eid prayer. In a religious message he conveyed, the Mufti called on the faithful to practise the values of love and mutual assistance, among others. Sheik Al-Amin Osman further underlined the need to demonstrate assistance to the needy and tolerance, as well as other virtues.

Meanwhile, a public holiday jointly organized by the Ministry of Information and the Eritrean Police Headquarters was conducted at the Expo grounds in connection with Eid Al-Fetir celebrations.

The public celebrations at the Expo grounds witnessed cultural performance by the Irab cultural troupe of the Eritrean Police Force.

Inhabitants of Enjihai engage in soil and water conservation activities