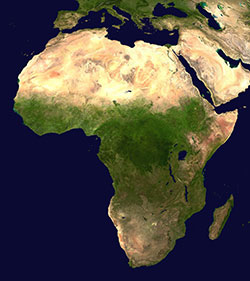 A summit has been called by President Barack Obama the 44th president of the USA for dialogue with most African leaders. China and Japan have had previously conducted such a gathering with no exclusion; inclusive of all African nations.  As this is the first of such gathering for an American president one can say it’s a historic opportunity for Obama’s legacy.  Nevertheless, we will see if the African Summit would help his legacy.

In February 2008 president Obama made a speech where he stated that the influence of money in politics, partisanship and bickering was ending. “Hope and Change” was coming “Value of Community” these were the promises he made and campaigned as a post-partisan. However partisan leadership is what the administration has implemented. Furthermore; the US administration’s passivity, being less personally engaged in foreign policy matters and avoiding US foreign entanglement and retreat has put his legacy in jeopardy.

Vladimir Putin who has understood American passivity has acted decisively in Crimea and Ukraine. Chinese, have clashed with Vietnam in the South China Sea, and are increasingly provoking vis-à-vis Japan over claims to the Daioyu/Senkaku Islands. North Koreans and other elements have likewise factored the perceived American withdrawal from the world into their own strategies. In the Middle East the Israeli Palestinian peace agreement has not moved an inch. Gaza and Israeli cities are in disarray and the region has turned into a war zone. Iraq is in constant turmoil divided between Sh’ia, Sunni and Kurds. Libya remains a divided country with different functions fighting each other and the American embassy evacuating from Libya. Syria is in turmoil for almost three years with no end in sight. Christians in the Middle East are in danger and being evicted from their home land. Egypt, an American partner for decades has openly announced that it is reaching out to Russia at a time when Moscow is increasingly seen in the West as a ‘threat to international stability’. India has backed away from closer cooperation with Washington, as its traditional relations with Moscow have remained warm; India was one of the few countries voicing outspoken support for Russia’s takeover of the Crimea.  The BRICS nation’s inception and formation of a New Development Bank with 50 billion dollar and Contingency Reserve Arrangement of 100 billion dollar has ended the monopoly of the Western financial dominance and has shown the weakness of the US economical superiority.

The US’s retreat and indifference as the leader of the free world is becoming clear and obvious by the day. Decreased America international assertiveness has irreversible harm to Americas International standing as the world’s only superpower.

In the domestic arena- the US administration advocated that it stands for a post-partisan era but the leadership stood for partisan. Signature achievement like the Affordable Care Act, the administration negotiated with Republicans, making deals with congressional committees, cutting deals with interest groups like “Big Pharmacy and Insurance Companies” offering up cuts to Social Security benefits to demonstrate “seriousness” as a deficit-cutter.  The administration’s dream has been to strike a “grand bargain” with Republicans and the austerity lobby to slash trillions of dollars in social programs, Social Security, Medicare and Medicaid, and pretty much acting like business as usual politician, not a post-partisan.

In his first term; the Obama administration had two major domestic policies to deal with: the final shape of the economy and the fate of the Affordable Care Act. The trillion dollar stimulus (subsidy to the rich) avoided the fall of the banking system, but it didn’t bring the economy back to speed. The economic policies have dragged Americans through a painful recovery, with high unemployment, stagnant wages, and cuts to public sector employment. An extraordinary political capital wasted to pass it. The affordable Care Act has been an important growth of the welfare state for which Obama will be remembered. If the Affordable Care Act expands insurance to all Americans slows costs and moves the health care system to the likes of Canada or Western Europe; then Obama will be remembered as one of the great leaders for his accomplishment like FDR with the implementation of the Social Security Act and what followed. But if it doesn’t succeed Affordable Care Act will be remembered as a bill that temporarily bailed out the Insurance Companies; a slip-up, liability. If the economy remains stagnant and a failed Affordable health care the legacy will be known as second-rate at best.

The administration’s second-term agenda, gun control and immigration are in the spotlight on Capitol Hill. In a feel of what is in store, Democratic gun legislation arrived on the Senate floor facing an aggressive Republican effort to block it. Unlike the foreign policy challenges the administration can’t flee the domestic agenda. They have to deal with the country’s business, debt-ceiling, gun control, liberalizing of immigration law, aid to the poor, raise taxes on the rich, the auto-budget cut and defense budget. The administration will need to win 17 more Democratic seats to take over the Republican’s control of the House and control both chambers of congress and pass bills. If that is the case (which is unlikely) the administration will be remembered as one which converted from a lame duck to a “soaring eagle”.

The administration’s promises never kept “community is American Value”, “change” “economic racial equalities” “spread of Democracy” were the promise none of it transpire. As stated above during Obama’s presidency and leadership the World has turned into war zone and US economy is in appalling shape. The current US administration has no mandate from the American people or the political will to assist the African leaders in the sphere of economic development or to enhance good governance to think otherwise will only negate the course of history.

In summation; the new financial institution initiative by the BRICS nations and the Chinese Yuan-dim-sum bonds has reduced the dependence on dollar and euro and certainly change the role of IMF and the World Bank in the near future. Chinas aggressive investment and trade policy in Africa is a sign of Africa’s sizeable market potential and the decline of Europe’s dominance and American political influence. African leaders and people needs are partnership in investments and trade. International corporations and markets are the unseen arbiters of power today and not leaders of some superpowers. As a matter of fact it’s much more important for the African Leaders to get a hearing before corporate investors at an Economic or Investors Forum than to appear at summit with a president.