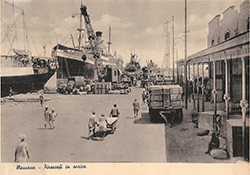 The British Military Administration replaced the Italians in 1941. However, it was not for the advantage of the oppressed and exploited Eritreans. The British administration retained the Italians in all major and minor offices. It strengthened their land property holdings. Business licenses were given only to Italians for the exploitation of woodlands, mineral resources and retail shops.

During the first three years of British administration about 300 industrial firms were set up. Example: aircraft assembly plant, and aircraft repair base were established in Asmara and Gurae. However, the British administration was fully aware that it would not remain as an occupying power in Eritrea. So, it designed a strategy to devitalize the economy of the country and partitioned it. This has been intentionally done to convince the international community and to prove that Eritrea’s non-viability as an independent country. In order to implement its motives Britain put forward the following strategies: 1) It proposed Western Eritrea to be part of the Sudan which has been its colony; 2) It began to devitalize Eritrea’s economy. Some of the destructions have been: It destroyed the airport facilities in Asnara, Assab and Gurae; It sold the stationery and floating docks at Massawa to Pakistan and 16 harbor boats to Italian and Arab merchants; It destroyed and dismantled port buildings, store houses, crane, residential areas at Massawa and store buildings built by the Americans at Mai Habar, Gindae, Asmara and Gurae; It sold the cable ways from Asmara to Massawa to other countries. It sold the cement factory at Massawa to the Sudan; it dismantled cotton, coffee and tobacco plantation plants and were abandoned; 500 fuel tanks from Massawa, potash industrial plant at Fatma Deri, drilling and detecting machines of oil from Nakura were sold abroad.

These were some of the horrifying destructions made by the British administration. This was done simply to convince the UN and the international community that Eritrea was not economically self-reliant so as to retain it under its control or to give part of it to Ethiopia and the other part to the Sudan.