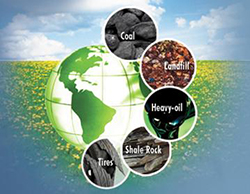 Environmentalists and scientists often refer to the two different ends of the environmental problem as sources and sinks. Thus the environmental limits to economic growth manifests themselves as either: (1) shortages in the “source” or “taps” of raw materials/natural resources, and thus a problem of depletion, or (2) as a lack of sufficient “sinks”, to absorb wastes from industrial pollution, which “overflow” and cause harm to the environment.  The original 1972 Limits of Growth study emphasized the problem of sources in the form of shortages of raw materials, such as fossil fuel, basic minerals, topsoil, fresh water, and forests. Today the focus of environmental concern gas shifted more to sinks, as represented by climate change, ocean acidification, and production of toxics. Nevertheless, the problem of depletion of resources used to production remains critical, as can be seen in discussions of such issues: declining freshwater resources, peak (crude) oil, loss of soil fertility, and shortages of crucial materials like zinc, copper, and phosphorus.

In conventional environmental analysis the issue of a shortage or depletion of natural resources has often been seen through lens as principally a problem of overpopulation. Thomas Malthus raised the issue in the late eighteenth century of what he saw as inevitable shortages of food in relation to population growth. This was later transformed twentieth-century environmental theorists into an argument that current or future shortages of natural resources resulted from a population explosion overshooting the carrying capacity of the earth.

The following analysis will address the environmental problem from to source or tap end, and its relation to population growth. No systematic attempt will be made to address the sink problem.
However, the tap and the sink are connected because the greater use of resources to produce goods resulted in greater flows of pollutants into the “sink” during extraction, processing, transportation, manufacturing, use, and disposal.

In approaching the source or tap problem, we have to recognize there is a finite planetary quantity of each nonrenewable resource that can be recovered economically. In theory, it is possible to calculate when the world will run out of a particular resource, given knowledge of the amount of resources that exists, technology, costs, and likely demand-though the various factors are often so uncertain as to make firm predictions difficult. However, the amount that can be extracted economically increases when the price of a particular resource increases or new technology is developed-it then becomes economically feasible to exploit deposits that are harder to reach or of less purity and more costly to obtain.