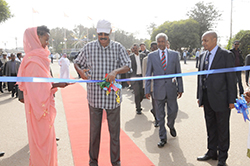 Asmara, 16 August 2014 – President Isaias Afwerki opened National Eritrea Festival 2014 in the morning hours today. The opening ceremony at the Expo Grounds in Asmara was conducted in the presence of Ministers, Army commanders, regional Administrators and senior PFDJ heads, as well as Sudanese guests and diplomats.

During the inspection of the Festival being conducted under the theme “Culture: Guarantor of Existence and Continuity”, the President received briefings regarding the contents and the message of the display.

In the Festival that would continue until the 23rd of this month, the Administrative regions would highlight their respective resources, development momentum, progress registered in the domains of education, health, infrastructure and people’s standard of living, among others. In other respects too, creative works and innovations on the part of production establishments would feature at the Festival.

On the eve of the Festival last-night, cultural shows program was presented at Cinema Roma here in the capital which was broadcast live through ERi-TV.