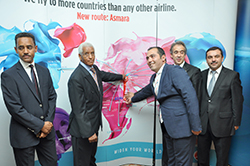 In line with the agreement concluded between the Governments of Eritrea and Turkey, Turkish Airlines has begun regular flight to and fro Eritrea 3times a week.

Asmara, 21 August 2014 – In line with the agreement concluded between the Governments of Eritrea and Turkey, Turkish Airlines has begun regular flight to and fro Eritrea 3times a week.

The first flight of the Air-Bus 321 from Istanbul to Asmara accommodated a total of 68 Eritrean nationals. Heads of the Eritrean Civil Aviation Authority, representative of Turkish Airlines and members of the Turkish Embassy in Eritrea and of other countries were present at the welcoming ceremony.

Speaking at Hotel Asmara Palace in connection with the inauguration flight in which Senior Government and PFDJ officials, as well as invited guests took part, Mr. Paulos Kahsay, Director General of the Eritrean Civil Aviation Authority, said that the launching of the Turkish Airlines flight would make significant contribution in strengthening trade partnership, in addition to the fostering of bilateral relations.

He further indicated that the Airlines would provide cargo service on the basis of Eritrea’s domestic and international air transport laws. Mr. Paulos also expressed conviction that the new service would ease the constraints encountered as regards to and fro Eritrea.

Also speaking at the ceremony, Mr. Firat Sunel, Ambassador of Turkey to Eritrea, said that the flight of Turkish Airlines to Eritrea would strengthen relations between the two countries, in addition to encouraging Turkish nationals to engage in investment ventures in Eritrea, besides making due contribution in promoting trade and tourism activities.

Likewise, the representative of Turkish Airlines, Mr. Hassan Hamdan, noted Eritrea’s strategic importance in the Horn region, and expressed satisfaction with the beginning of flight service between Asmara and Istanbul.

It is known that Turkish Airlines provides service to over 60 million people annually through 260 routes.