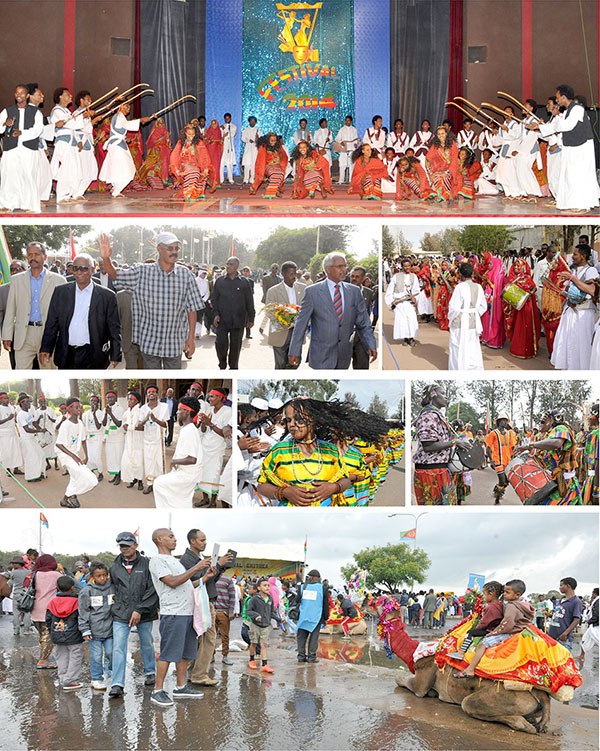 Multicolored combination of traditional dance and music of all Eritrea’s ethnic groups welcomes people who flocked to the expo grounds early in morning hours of 16th August 2014. A number of people have awaited the coming of this festive event with intensified eagerness. It has been just one year since the closing of last year’s national festival, but the intensified appetite of the crowds to take part in such a festive event, makes one wonder as if the event is being conducted after an elapse of a decade. The welcoming traditional music and dance by far heightens the eagerness of visitors and it indeed became a very pleasing opening show which opened a gate to the other programs that were yet to be unveiled.

Different pavilions have been presenting displays of different kinds. Open air areas of the Expo grounds have become platforms where every visitor could make a deep observation of cultural diversity.  Traditional dance of the Hidareb ethnic group  which resembles that of birds movement, romantic dances of the Kunama, and flattering lyrics of the Tigrinya, unique hair breading and hair cut styles along with respective dance performance of all the nine ethnic groups of Eritrea have all been presented in the open air stages of the expo grounds.

What is more is that on the stage on which the dancers from the Gash-Barka region have been performing, one could see live snakes crawling on the ground. To one’s surprise the dancers roll the snakes up on their waist and also straighten them at ease. This very scene tempts an observer to play with the snakes but nobody dares to make it so for the huge body of these reptiles is very scary. However, members from Garh-Barka cultural group play with these creatures as if rolling threads but not reptiles.

Besides the enthralling dance performance of the Tigrinya ethnic group, one could be amazed to see a slim boy lifting a huge and slippery stone and making dance moves as if carrying a lightweight replica of the famous stone called “Emni Hayli. This very stone challenges the strength of a mighty youth and is in fact very hard to lift it from the ground let alone to carry it on one’s shoulders. The village where the stone came from was named after this mysterious stone which has a history of its own.

The cultural shows being presented AT the Expo grounds have a power to make Eritreans wonder,  let alone being a foreigner, and get engrossed by the very attractive presentation of their own culture. So, one could observe foreigners capture every impressive event through their cameras. They do not only want to take pictures but they try to be part of physically. Hence, they join to the traditionally dressed members of the different ethnic groups and have a record of their sojourn in Eritrea with whatever recording device they have.

A pictorial exhibition that shows Eritrean youth of the 1940s  and a marching band team which comprised Eritrean and Italian musicians followed by photographs that highlight three stages of modern music in Eritrea makes visitors stay tuned to what is presented before them and also force them to make a journey to the past. Different music crews which represent different eras and their music instruments are clearly depicted there in the exhibition. In the same pavilion, a number of well captured pictures have been displayed. These photographs are indeed part of the photography contest the Ministry of Information organized. Different pictures that were taken in different occasions, some of which are eye catching and very amusing, coupled with the other photographs that give pictorial description about the steady progress of Eritrea’s modern music have made the pavilion a center worth to be revisited without any sign of exhaustion.

Following to the pictorial depiction of early development of modern music of the 1960s and that of 1970s in Eritrea, another section of display of photography shows cultural performance during the period of the struggle for independence and their input in the development of Eritrea’s modern music. Bands of the Eritrean Liberation Front (ELF) and also of the Eritrean People Liberation Front (EPLF) as well as music groups of mothers and cultural troupes of children performing on stage makes one clearly understand the level Eritrean music reached at the very harsh period of the struggle for independence. Other photographs also depict cultural shows staged in the post independence period starting from the early days of independence to date.
Besides cultural assets, visitors of the national festival have been observing production of different business firms.  The availability of different products and the display of priceless items has become a nice opportunity where every visitor, be Eritrean or a foreigner, could learn a great deal of Eritrea.

Eri-Tel (Eritrean Telecommunications Service) has, for instance, staged different outdated telephones that show the gradual development of communication facilities in Eritrea. There exists a pavilion next to telecommunications display section which staged different paintings and sculptures. This very center is where artists from the Ministry of Defense used as a studio and display site. The most recent works of painting displayed there the vents during the Demise of Wkaw Command. A Pavilion of the struggle for independence have also staged different items that depict the hard times which the Eritrean people and the feed fighters were forced to endure as well as the huge sacrifice they made to freed Eritrea.

The ministries of Education, Agriculture and the Ministry of Health on their part have come with varied items. Endeavors that have been exerted towards boosting the aforementioned sectors are now vividly presented at the pavilions on the Expo

A first of its kind since the opening of the national festival at the Expo grounds in Asmara, that is, in the post independence period is, presenting a poem through a cartoon.  The fusion of these different forms of arts is what attracted attention of a number of visitors.

What has been attempted through the interpretation of poems into cartoons is to see what the outcome of such an artistic work would be? And also to give a variety to what has annually been presented on the Expo grounds.

As poems are very sort to be read compared to short stories, cartoonist Brhane

Ghebreyohanees a.k.a Bruno have said that such an initiative of translating poems into cartoon would open  a venue  where  artists of these different art forms could work together.

The poems and the cartoons have been displayed side by side so that the audience could give their suggestions and see whether the interpretation is good enough or not.

Drum beats; vibrant ululation, flexible movement and swaying of swords, and jingling sounds of ornaments fill one’s ears with an atmosphere of festivity. Different live cultural shows that have been staged at Expo make one busy just to enjoy the cultural shows and to stay focused learning each and every move made different cultural groups. Making visits to the Expo grounds as much as possible could give one an opportunity to learn much of Eritrean culture, economy, and livelihood of nationals in each of the six regions and much more.