NUEW to hold 7th Congress from 15 to 17 September 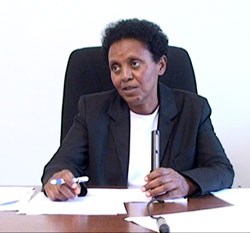 The National Union of Eritrean Women (NUEW) will hold its 7th Congress in Asmara  from 15 to 17 September.

Asmara,27 August 2014- The National Union of Eritrean Women (NUEW) will hold its 7th Congress in Asmara  from 15 to 17 September. The Chairperson in charge of preparations for the Congress, Ms. Azeb Berhane , told Erina that the necessary  activities are underway as regards designating the participants from inside the country and abroad, holding debate on the Union’s constitution, finalizing the final document regarding activities of the Union over the past 10-years and the holding of symposium, among others.

Stating that the NUEW has been exerting effort to promote the goal of building a nation that guaranties equal participation of citizens and one that ensures social justice, Ms. Azeb, that the 7th Congress of the Union would map out the necessary strategy for reinforcing the accomplishments registered so far and strive for still more gratifying achievements.

It is to be recalled that the NUEW held its 6th Congress in 2003.