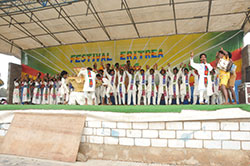 All the six regions of Eritrea have been at the Expo grounds in Asmara where all the nine ethnic groups have also been represented. Festival Eritrea 2014 like its preceding festivals has been an event for national gathering. Sounds of horns and dram beats, ululations, works of invention and innovation, paintings and sculptures, poems and short stories, modern as well as traditional music and dance, oral traditions, construction of traditional houses coupled with traditional livelihoods, traditional sports competitions, photography exhibition, displays of service rendering institutions and that of mining companies and products of other small scale industrial plants have been there at the Expo grounds. As an eye never fills of what it sees and an ear never gets tired of everything pleasant it hears one could not imagine how cheerfully everybody at Expo hall (G3) enjoyed the official closing celebration.

The closing ceremony of this year’s national festival started with vision impaired students from Abrha Bahta Primary School giving rendition to Dawit Ghebresenbet’s song titled “Harem”. This very song was accorded with a standing ovation of the audience who were eager to see who or which region would be announced winner in respective presentations.

What followed next was a song in Tigre language. Members of cultural show from the Northern Red Sea region sung it in chorus accompanied by a puppet dance and Shelil-a traditional dance of women from the same ethnic group.
A song in Tigninya titled “Embebakum Kfteweni” also rocked the audience. The chirographers in this respective song were active enough in stimulating dancing mood so as to attract people join the dance floor.

Ambassador Zemede Tekle gave a briefing about the organization of this year’s festival. He said that despite the delayed decision as regards conducting the national festival in Asmara; the flexibility of all regions was highly instrumental towards holding it in a colorful manner.  “The credit of such success goes to the unique value of the Eritrean society.” He said.  Finally, Mr. Zemede commended the participation of children and youth in all programs that are related to education as well as creative and innovative works.

Every program staged at the Expo Grounds was with an aim of giving an added color to the week long festivity. Most importantly, all vivid cultural shows staged with an air of competitiveness among the six regions of the country were aimed at preserving and thereby transferring genuine Eritrean culture to future generations. Among the most impressive cultural shows and other competitions the focal point of which was culture include: traditional music and dance, traditional sports competitions, construction of traditional houses coupled with traditional livelihood and oral traditions (oral literature).
It has been to witness the final winners of the varied preparations that government officials, senior citizens and cultural groups of the six regions, students, artists, and other talented youth were present during the closing as well as warding event that was held at Expo compound in the evening hours of 23 August 2014.

Cultural shows were not the only programs that were open at the Expo Grounds, but different works of art including literary works such as: short stories, top ranked dramas and different documentary films were also part of the national festival. As usually, top ten songs produced in all Eritrean languages were also announced during the closing ceremony.

Paintings, sculptures, and handcrafts as well as works of invention and innovation, photography competition organized by the Ministry of Information and exhibition of photography that portrayed development of modern music in Eritrea were also among the most visited artistic works.

According to the report presented by Mr. Mokenen Kidane, works of visual arts such as 29 paintings by 26 artists and five works of sculpture by Yohannes Andemariam- who was awarded 5,000 Nakfa during the very closing ceremony have been showcased in the national festival. Mr. Mokenen cited the reduction in sculpture works as a weak point in this respective field of art.

In this year’s festival, 49 short stories, the two of which are in Tigre and Saho languages and the rest 47 in Tigrinya were presented for competition. Top 10, out of the total number, have been selected to be published in a book form.

The committee of judges has also ranked top ten songs produced in the last three years. The ranking of songs were made in different phases. According to a report made during the closing ceremony, out of around 700 songs in all Eritrean languages, the committee ranked top 30 and the 20 of which to be awarded through certificate of appreciation while the last ten received certificate and monetary awards.

As soon as the Southern region was announced winner in the construction of traditional houses and traditional livelihood, an overpowering emotion forced member of this region’s cultural group to jump and to totally seize the podium where all winners were being awarded and danced with utmost triumph accompanied by Tomas Alazar’s song “Liki’e Kemtom Ghedli” roughly translated as “Similar to that of the Freedom fighters.” This song was awarded as the best of all around 700 songs produced in the last three years.

Fusion of Arts in the National Festival