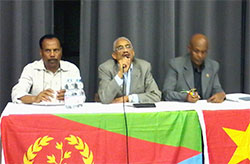 The Eritrean Ambassador to Italy, Mr. Fisehatsion Petros, said that building a united and prosperous nation is the top priority of the Eritrean people and government.

Asmara, 05 September 2014 – The Eritrean Ambassador to Italy, Mr. Fisehatsion Petros, said that building a united and prosperous nation is the top priority of the Eritrean people and government. He further elucidated that the Eritrean people and their leadership are exerting persistent effort to build a nation in which the citizens share an integrated pattern of thinking, purpose and vision, a developed and participatory political system and a strong economy, as well as a country in which social justice prevails.

Mr. Fisehatsion made the remarks at a seminar he conducted with Eritrean community

members in Bologna and its environs, during which he gave briefings focusing on the objective situation in the Homeland and the external conspiracies against Eritrea and the staunch resistance of citizens against such animosity, in addition to the work program of the Eritrean Embassy and that of the Consulate. Moreover, the Ambassador outlined the pace of development programs in Eritrea in various sectors.

The participants of the seminar on their part reiterated readiness to step up participation in national development programs on the basis of higher organizational capacity.

NUEW to conduct symposium in connection with forthcoming 7th Congress