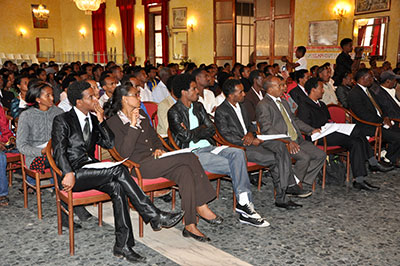 There is nothing people with disabilities would not reach provided that they are equipped with different enabling tools. Such tools can mainly be obtained through education and through different sorts of training courses. Various causes could become reasons for disability. Some sort of disabilities could be inborn while others are results of casualties and different unforeseen dangers.  What should be more of a concern is not the disability of individuals but rather how to make such people as productive as any person without any physical disability could be. If Braille is a tool for visually impaired people, sign language is also a tool for hearing impaired people. It is in an attempt of girding hearing impaired nationals with a sign language and thereby to literate them as well as to enable them to get involved in activities of different sorts that the National Association for Hearing Impaired, the Ministry of Labor and Human welfare as well as other concerned parties have been keen at nurturing competent nationals where physical or other sort of disability is no more a challenge.

Nurturing hearing impaired nationals with necessary skills and with know-how in different disciplines, providing them with an access to education and ultimately enabling them to overcome any sort of challenge   that may stand before them has been the main task of the National Association for the Hearing Impaired, which was established   in

1998 under the umbrella of the Ministry of Labor and Human Welfare.

The National Association for Hearing Impaired has therefore conducted its 4th congress on 31 August 2014. In this congress, Kahsay Ghebrehiwet, minister of Labor and Human Welfare, members of the Association, representatives of different national associations and invited guests took part.

According to Mr. Mehari Tewelde, Chairperson of the National Association for Hearing impaired, the association has been exerting efforts to increase the number of its members thorough an inclusion of people with hearing difficulty from all regional the country and also nationals with such challenge from the abroad.  Mr. Mehari has however never denies that the Association has yet a long journey to go so as to become a strong association that could implement mapped out programs effectively.

In a briefing he gave at the 4th congress,  Kahsay Gehebrehiwet, minister of Labor and Human Welfare said that nurturing people with disabilities it is the responsibly of Eritrean society, of the Government and other concerned parties and thus the Eritrean Government has been relentlessly working towards improving the living standards of nationals with different sort of disabilities.

Mr. Kahsay further said that the establishment of different associations for people with disabilities and their input towards improved lifestyle, community based rehabilitation programs that have been effective in changing people’s outlook towards disability have been among the positive outcomes so far registered.

Pointing out that the last 16 years since the establishment of the Association for Hearing Impaired could be taken as a leaping ground towards further accomplishment, Mr. Kahsay retreated that people with disabilities should at first believe in self reliance and the challenges that Hearing impaired nationals may face would be surmounted through an all-round societal participation.

As highlighted by Mr. Zekarias, the association has so far provided training courses on sign language to more than 50 individuals who have been working in different professions such as:  journalists, police, and judges and to more than 200 hearing impaired nationals who have been using sign language traditional at their respective localities. Besides the aforementioned training, the association has also provided training in computer Science, wood works, Weaving, Video shooting, Management, Painting and sculpture, as well as Athletics.

What makes the sign language courses more important is that parents and different professionals alike have attended it. Thus the journalists, police and judges, who attended the training, do not have hearing difficulties, but knowing standard sign language would help them to understand people with such difficulties at ease.

The sign language courses that have been provided to all hearing impaired nationals have the same standards, all people from different regions of the country could smoothly communicate and exchange ideas without difficulty.

According to Mr. Zekarias, among the major achievement of the National Association for Hearing Impaired include: the publication of a sign language dictionary with 6,000

entries and which took more than six years to be completed, another book of sign language with around 2,000 entries which has been translated into Tigrinya, Arabic and English, and also the production of a documentary film in 2011.

Based on a research conducted by the National Association for Hearing Impaired, there are above 40,000 Eritreans with hearing difficulties, among which the 5804 are registered members of the association.

The participants of the 4th congress of the National Association for Hearing Impaired made extensive deliberations and thus suggested on the need of sign language as a means of instruction from 6th to 12 grades so as to enable people with hearing difficulties complete their academic carrier successfully. The participants of the congress further commented on the issue of driving license and giving equal job opportunity to hearing impaired people.

Head office of the National Association for Hearing Impaired being in Asmara, it has branch offices in Anseba, Northern Red Sea, Gash-Barka, Southern regions as well as in different Scandinavian countries.