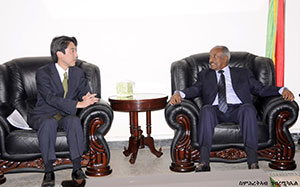 The Japanese government has expressed readiness to foster partnership of cooperation with Eritrea.

Asmara, 16 September 2014 – The Japanese government has expressed readiness to foster partnership of cooperation with Eritrea. This was disclosed at a meeting which the visiting Japanese Deputy Foreign Minister, Mr. Minoru Kiuchi, held with Foreign Minister Osman Saleh today.

In the meeting, the two sides reached agreement on strengthening diplomatic ties between both countries, and to this end open a Japanese Embassy in Asmara.
Moreover, discussion was conducted on the need for Japan, as a developed nation, to enhance its role towards the implementation of the final and binding ruling of the Eritrea-Ethiopia Boundary Commission.

Meanwhile, the Japanese delegation held a meeting with the Eritrean Finance Minister, Mr. Birhane Habtemariam, regarding prospects of bilateral cooperation in the field of development and investment.

The Japanese delegation made a tour of inspection to Zeir textile factory, Medeber and other important sites.