French groupe de musique for one day performance in Eritrea 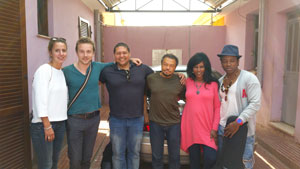 The group is three man music band from France. Three music band is unusual in the world of music for most bands have a total of four of five members. However, there is that rare instance where only 3 people get together and are able to create some amazing tunes. These are what I consider to be some of the best bands that only had three members. They are not crowded with lots of instrument and easy to travel and perform without taking a bunch of time tuning their instruments.

This is only for an introduction of some thought of music bands with very few members and their advantages. On Wednesday, 17th of September, a three man music band from France came to Eritrea in sponsored by the Alliance Francaise and the PFDJ Cultural Affairs.  They performed their music on the 17th of September at the Cinema Roma. The name of the band is CAB representing the nationalities of the members. C – stands for Caribbean, A -for Africa and B- for Brazil. The three members are from the three continents. The pianist Mario Canonge is from the Caribbean, Blick Bassy, the vocalist and guitarist from Cameroon while Adriano Tenorio from Brazil. The fourth supporting member of the group is sound engineer, Clement Cornuvan. The sound engineer adds the fourth continent to the music band, Europe. Due to language barrier I have been confined to talk about the formation of the band with the sound technician Mr. Clement and with some assistance for the Director of Alliance Francaise, Ms. Ceute Antonietti.

Could you tell me please why you are in Eritrea?

We are here at an invitation from the PFDJ Cultural Affairs and Alliance Francaise office in Eritrea and as part of our African tour.

Which countries in Africa are you to visit?

We have a program to perform in several African countries including Uganda, Djibouti, Rwanda, Tanzania, Ethiopia and Kenya.

Is this your first time to come to Africa?

No, I myself have been to once to Egypt. Blick Bassy is an African born in Cameroon and the rest are for the first time in Africa.

When was your music band established and why from different parts of the world?

The music band has been established in 2012. The combination is partly just it happened that Mario and Blick now each other in Paris. They have been playing together and they decided to form the band and they included Adriano as a musician and me as a sound engineer. That is how the band has been formed. And the outcome and performance has been found promising and we go on working together.

Why did you choose to have only three members?

There are a lot music bands established by three people. We are part of them. And a piano, percussion and guitar are enough to perform good music.

How did you find Eritrea?

I, in my part, have never heard of Eritrea. And I think it is true of the rest of the members. With our first experience we are fascinated by the beauty cleanliness of the city, hospitability of the people, the audience is fascinating. We are also grateful to Dehab Faytinga, the Eritrean renowned artist, for her hospitality, she invited us to her house. And we are looking forward to come again to Eritrea and experience more about the people, the culture and history of the country which I think is unique. Even though we have been here for only three days we are really impressed from what we have observed in Asmara. From my initial observation I could say that you are good people.

Good luck!
Thank you very much!