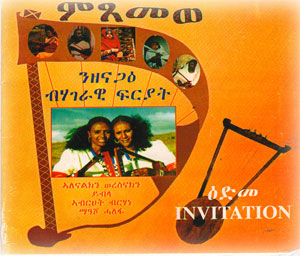 In a book entitled ‘Who needs a story?’ (Hidri: publishers June 2005), one poet named Mohamed Osman Kajerai outshined women of Eritrea’s as:
“Elegant, exalted and true,
Born of the rock of respect, faith and resistance”

In 1950s and 1960s, as documents show unflinchingly, at that time, in addition to the dominating Western and less often Sudanese and Somali music productions, Tilahun Gesese’s and Bzuensh Bekele’s songs were also among those highly acclaimed. Very fortunate enough, however, to downsize such impacts, interested nationals founded ‘MaHber Tiater Asmera’ (Asmara Theater Association) on August 3 of 1961. At its initial stage, therefore, this association was successful for embracing three women: Genet Teferi, Ethiopia Medhane and Tsehay, were the first women that joined the association.

Yet, Abrehet Berhane was two years old by the time ‘MaTeA’ has started igniting its rocky power to excel cultural and national heritages profoundly. And yet, time continued bringing various scenarios in the life of Eritreans. By the time Abrehet was 14, Asmara was under gloomy situation. On its 3 April 1976 publication, ‘Ad¬dis Zemen’, an Amharic that time Ethiopia’s military clique disclosed:
“…before Eritrea was unconditionally annexed, schools, Churches Mosques were built to lure the Eritrean masses. But after Eritrea was annexed, the policy … changed. Some factories and companies were removed … [Or] were made to reduce their work in Eritrea. In general …it destroyed the existing economy. Its action was that of the colonizers of the worst type.” Sourced out from this inexcusable policy, therefore, heart stabbing stormy of poverty, among other factors, influenced Eritreans standard life negativity.

As common scene of that time, therefore, Abrehet Berhane joined Eritrean armed struggle for independence in1978. The experience was unique; the egalitarian life style of the fighters was a little bit strange. Individual identity replaced by commonly constructed collective identities; however, Abrehet didn’t take so long time to adopt the situation. And she never stopped from attempting attuning the strings of ‘Kirar,’ a traditional music instrument. And in the fall of 1979, cultural troupes (Bahli) at brigade level have been formed. For Abrehet, the word ‘Bahli’ was new, unrealized and conceptually entangled.

After managing her relentless efforts that was extremely lop¬sided into art, as rule of the time fascinating revolutionary Organization guidelines, she joined the brigade ‘Bahli’ which was under the command of Seid Abdela. Truly, while she was in Asmara, Abrehet had the norm of hearing such songs. Amleset Abay, Wedi Pillipos, Zerai Deres’s band songs, MaTea’s productions and others, were the overwhelming songs which has reserved great reminiscences of Abrehet’s profile.

After some years, on January 22/24 of 1984, Abrehet took her ‘kirar’ and played it in front of the tenacious fighters. She enabled to outshine her talent not only as a singer but also as musician, playing Kirar.

Majority ‘Enda- Suwa’s’ (local beverage), homes for selling traditional beer, were famously figured hubs for entertaining the indigenous citizens with the locally produced songs and other accoutrements. There, in ‘the Enda Suwa’s, the women have a comparatively opportune ground for playing ‘kirar’. Tsehaytu Beraki, one of the forefront leaders of such performance, for instance, was born in Quatit in 1939. She used to sing and play Kirar at different ‘Enda-Suwa’s that were stretched from Kidane Mihret Church (shuk) to the areas of Cherhi, Aba-shawil and Edaga- Arbi.

Women singers and musicians at this period of time have been the first pioneers to break the old tradition that women have not been welcome to perform music at such public areas. They have been, initially, being isolated from the public and especially from their friends and relatives. But that isolation did not deter them from pursuing their talent. The continued playing and in the mean  time they influenced the young women generation like that of Abrehet to master the Kira and produce beautiful melodies.

Abrehet through practice emerged as one of the talented players of the traditional music instrument and to this day she had not abandoned her profession.

Market-Capitalism: What’s in store for Eritrea?