STATEMENT DELIVERED BY H.E. Mr. OSMAN SALEH MINISTER OF FOREIGN AFFAIRS OF THE STATE OF ERITREA AT THE UN CLIMATE SUMMIT 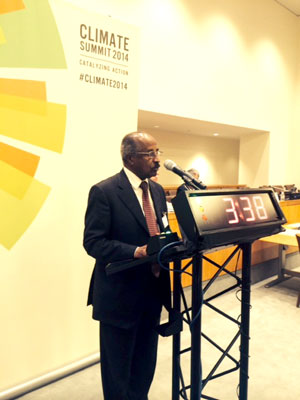 At the outset, let me take this opportunity to welcome the initiative of H.E. Mr. Ban Kimoon, Secretary General of the United Nations, to hold UN Climate Summit as part of the UN strategy to advance climate action for an ambitious global agreement in 2015 in Paris. This is an important occasion for countries and stakeholders to make bold commitments to reduce greenhouse gas emission (GHG) and tackle important global issues.

Eritrea, as a country located in the Sahel belt recognizes the ramification of inactions at a time when humanity is witnessing extreme destructive weather condition as a result of increased carbon emission and climate change. Eritrea contributes almost nothing to the green house effect, yet along with other countries in Africa, Least Developed Countries and small island states, suffers the most from the adverse effects of climate change, posing more bottle necks to its developmental efforts, including the attainment of food security and alleviation of poverty.

Eritrea has been working on forward looking actions that will reduce greenhouse gas emissions and strengthen climate resilience. These actions are framed around the elements of the Ad Hoc Working Group on the Durban Platform for Enhanced Action (ADP), including mitigation, adaptation, finance, technology, capacity building and transparency.

These actions include, preparation and submission of the National Appropriate Mitigation Actions (NAMAS); preparation and implementation of National Adaptation Programms of Action (NAPA; and embarking assessments of barriers and needs of finance and technology.

Climate change requires global solution and local actions. Eritrea, within its means and resources, has been mobilizing grass root communities, women, students, the army, civil society organizations and religious leaders to actively work on environmental restoration, such as soil and water conservation, afforestation, smart agriculture and proper utilization of natural resources. Additionally, innovative energy efficient stoves have been invented and introduced, and more investment are made on renewable energy as a commitment of the government to sustainable development.

Given the time constraint, let me conclude by highlighting the following elements:

*Climate change must be addressed with a sense of urgency that it deserves;

*Developed state parties, the private sector and civil society must take into account the special circumstances of vulnerable countries, particularly Africa, the least developed countries(LDCs), and small island states in their effort to promote ambitious and nationally determined contributions to the global agreement  by 2015;

*The new global agreement to be concluded in Paris must be ambitious and meaningful.