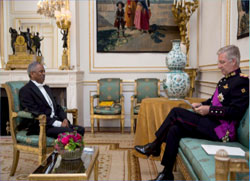 During the presentation ceremony, the Ambassador conveyed President Isaias’ message of goodwill to the Belgian monarch and people, and expressed Eritrea’s readiness to strengthen the existing bilateral relations between the two countries. The two sides conducted discussion on partnership possibilities in various sectors.

Expressing appreciation for Eritrea’s initiative as regards developing bilateral relations with his country, King Philip wished success to Ambassador Negasi in his duty and asserted full support of the Belgian government.

The King also wished good health to President Isaias, as well as peace and prosperity to the Eritrean people.

STATEMENT DELIVERED BY H.E. Mr. OSMAN SALEH MINISTER OF FOREIGN AFFAIRS OF THE STATE OF ERITREA AT THE UN CLIMATE SUMMIT