STATEMENT BY HIS EXCELLENCY MR. OSMAN SALEH MINISTER OF FOREIGN AFFAIRS OF THE STATE OF ERITREA AT THE GENERAL DEBATE OF THE 69th SESSION OF THE UNITED NATIONS GENERAL ASSEMBLY 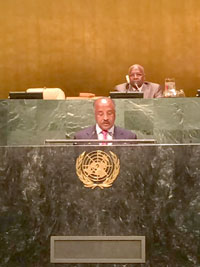 STATEMENT BY HIS EXCELLENCY MR. OSMAN SALEH MINISTER OF FOREIGN AFFAIRS OF THE STATE OF ERITREA AT THE GENERAL DEBATE OF THE 69th SESSION OF THE UNITED NATIONS GENERAL ASSEMBLY

STATEMENT BY HIS EXCELLENCY MR. OSMAN SALEH MINISTER OF FOREIGN AFFAIRS OF THE STATE OF ERITREA AT THE GENERAL DEBATE OF THE 69th SESSION OF THE UNITED NATIONS GENERAL ASSEMBLY, NEW YORK, 30 SEPTEMBER 2014

From the outset, I wish to extend my warm congratulations to you, my brother, for assuming the presidency of the 6gth session of the United Nations General assembly, under  the  theme:  “Delivering on  and  implementing  the  Post  2015 Development Agenda”, which is timely and most appropriate.

Let  me  also  seize  this  opportunity  to  express  my  deep  appreciation  to  your predecessor, Ambassador John Ashe, for a job well done.

Next year, 2015, marks the 70th  anniversary of the birth of the United Nations.  The world has changed almost beyond recognition since 1945.  Originally founded by so members, three times as many nations have joined the UN in the intervening years. The demographic, economic, political and cultural realities of its member states bear little resemblance to the past. The challenges of the time and the demands of the age are vastly different from those of the period following the Second World War, or even of the past few decades. Change, rapid transformative change, is the order of the day.

And yet, the  United Nations, the organization that  ostensibly represents  the entire community of nations and the peoples of the world, remains stuck in the past.   It remains thoroughly dominated  by the few and has marginalized the overwhelming majority. Its institutions and structures are an anachronism in the modern world.

More crucially, the United Nations has fallen far short of playing the primary role in the pursuit of the fundamental  objectives for which it was established. Maintaining global peace and security was and remains one of its cardinal goals; and yet, conflicts and wars, even simultaneous  and multiple wars have become a constant feature of our lives. Many of these wars are waged in total disregard for the United Nations and without its mandate. In Africa, from the East to the West and in the North, in the Middle East and in all continents, extremism, terrorism and all forms of bigotry and intolerance  are  spreading.  The  record  in  regard  to  other   key  principles  and aspirations  is also far  from  satisfactory;  whether  it  is  ending  poverty, ensuring sustainable  development, advancing human  rights, avoiding epidemics, respecting sovereignty  and  non-interference  in  the  affairs  of  others,  ensuring  justice  and equality as well as protecting the environment.   Undoubtedly, the world is facing a very grave and  dangerous  situation.  To paraphrase  the Secretary General of the United Nations, H.E. Mr. Ban Ki-moon, this is a “terrible time for the  principles enshrined in the United Nations Charter.”

To restore the relevance and credibility of the United Nations, to turn it into a truly representative institution of all nations and peoples, where all nations, no matter how big or small, respect its charter and international law, where all nations contribute, each according to its capabilities for peace and security as well as the welfare of people and the planet, it is imperative that  we fundamentally  restructure,  indeed, democratize and rebuild the United Nations.

This crucial and pressing need to restructure the United Nations has been clear for several decades now, starting from the heyday of the Cold War and throughout the past 25 years during which the world lived through an unsuccessful effort to impose a uni-polar world. Consequently, “UN reform” has formally been on the agenda for close to two decades. No nation has openly disputed the need to restructure the• UN, many workable proposals have been presented and thoroughly discussed and yet, we are  no  nearer  to change because  of the  stubborn  and  cynical opposition  of the dominant powers.

Given the determination of these powers to maintain their control of the UN and its unrepresentative and undemocratic character, the chances of genuine change in the coming few years are indeed slender. Thus, it is vital that all nations, peoples as well as political and social forces that stand for peace, independence, international  law, justice, equity and sustainable development forge a common front. They must consolidate partnership and coordinate their efforts on the basis of a broad common strategy to stem the threats  we face and build a better and more equitable world, while at the same time continuing without any let up the campaigns to restructure the United Nations, eradicate poverty, avoid conflicts, address global warming and fight all forms of terrorism and extremism.

Eritrea’s perspective on the need for an overhaul of the UN system is informed not only by the shared experience of the majority of nations, but also by its own history. The international system and the dominant powers have dealt the Eritrean people a raw deal. First, they were denied the right to decolonization and independence to satisfy what the then US Secretary of State, John  Foster Dulles, said, ‘the strategic interests of the US in East Africa and the Red Sea region.” Then, when the Eritrean people   embarked   on   a  30-year   armed   struggle  for   national   liberation   and independence,  in order to advance their geopolitical interest  in the Horn of Africa and the Red Sea region, the superpowers supplied arms and advisors to their client states to crush their rights to self-determination and the UN ignored their plight. And even after achieving independence  at a tremendous  human  and material cost and joining the community of nations, the Eritrean  people are still victimized. The UN, once again, has failed to uphold an internationally endorsed, final and binding arbitration  of the border decision.   In fact to add insult to injury, it has imposed unjust sanctions on their country.

This travesty of justice has caused harm not only to Eritrea but to the entire Horn of Africa region, which is now mired in endemic conflicts and instability.   Once again and  from this  rostrum,  Eritrea calls on the  United  Nations and the  UN Security council to redress this injustice by taking concrete measures to end the illegal occupation of sovereign Eritrean territory.

The unjust and unfair sanctions, for which everyone now agrees that there was no and is no justification must also unconditionally and immediately be lifted. Such long overdue measures would contribute positively to the tireless efforts of the Eritrean people to build their  nation, maintain  peace, stability and harmony, improve their livelihood, lay the foundations of a strong, equitable national economy, create opportunities   for  youth   and  women  and   advance  regional  and   international engagement and cooperation.