Statement by H.E. Mr. Girma Asmerom Permanent Representative of Eritrea to the United Nations On item 107: Measures to eliminate international terrorism At the Sixth Committee of the 69th session of the United Nations General Assembly 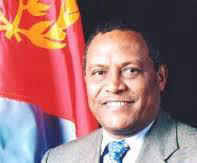 Statement by H.E. Mr. Girma Asmerom Permanent Representative of Eritrea to the United Nations On item 107: Measures to eliminate international terrorism At the Sixth Committee of the 69th session of the United Nations General Assembly

Statement by H.E. Mr. Girma Asmerom Permanent Representative of Eritrea to the United Nations On item 107: Measures to eliminate international terrorism At the Sixth Committee of the 69th session of the United Nations General Assembly 8 October 2014

At  the outset, let me join others in  congratulating the Tanzanian Permanent Representative for his election as Chairperson of the Sixth Committee for the 69th session. Likewise, I wish to extend my congratulations to the other members of the Bureau. I want to assure your Excellency of my delegation’s full support in the conduct of your responsibility.

My delegation aligns itself with the statements made by South Africa and Iran on behalf of the African Group and the Non-Aligned Movement respectively under this agenda item.

Terrorism is a complex phenomena that is a threat to international peace and security. In all continents, extremism, terrorism and all forms of bigotry and intolerance are spreading. As witnessed in many countries, state failures are creating a power vacuum that allows terrorist elements to obtain unsettling measures of power. Eritrea strongly believes that terrorist acts constitute a flagrant violation of international law and human indecency. Eritrea reaffirms its unequivocal condemnation of terrorism in all its forms and manifestations.  Eritrea  also  strongly  believes  that  acts  of  terrorism  should  not  be associated with any single religion, nationality, civilization or ethnic group.

In the volatile region of the Horn of Africa, Eritrea remains a peaceful and stable country. Despite the ongoing security challenges in the region and the unjust sanctions imposed on the people of Eritrea for political reason, the Government of Eritrea maintains social cohesion by pursuing a policy centered on inclusion.  In order to combat all types of extremism and terrorism, Eritrea, which is 50% Moslems and 50% Christians, has put in place various national legislative measures and taken concrete actions. It has submitted its national report to the Counter Terrorism Committee, pursuant to paragraph 6 of UNSC resolution 1373 (2001) as well as to UNSC resolution 1646 (2005). Recently, Eritrea has introduced proclamation no. 175/2014 titled “The Anti-Money Laundering and Combating Financing of Terrorism Proclamation”.

Eritrea is a party to the AU/ OAU Convention on the Prevention and Combating of Terrorism and other relevant regional conventions, including the CEN-SAD Convention on Mutual Assistance in Security Matters which allows the members to take stringent and tough measures to prevent terrorism, hostile activities and organized crimes in various forms. Furthermore, Eritrea has co-sponsored the recently adopted Security Council resolution on combating Foreign Terrorist Fighters.

Let me conclude by stressing that a unified global response is needed to effectively combat the danger posed by terrorists.   Intensification of cooperation is needed on information sharing and exchanging of best practices among countries and other stake holders. Underlining the need to effectively prevent and control the spread of terrorism, equal emphasis and resource should be devoted to the four pillars indentified in the Global Counter Terrorism Strategy, including the root causes of terrorism. Long standing inter and intra state conflicts as well as politically motivated unjust sanctions imposed against any developing countries must also be addressed as part of the overall strategy in fighting all forms of terrorism.

Sanctioning a developing country will only perpetuate poverty and aggravate social and political crisis. Poverty and crisis are issues that terrorist attempt to exploit. They use poverty and crisis as a means of recruitment. They also used them to justify their criminal activities. We should fight all forms of terrorism collectively and comprehensively.

I thank you Mr. Chairman

Prevailing peace and security in Eritrea makes it attractive for tourists: Visitors