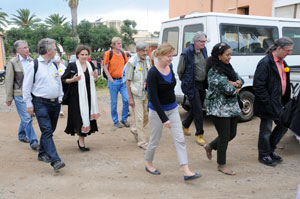 In 1977 he made his first trip to the field. It has been in the field that he came to understand more about the revolution, the policy of the EPLF, the life of the combatants and the activities that have been conducted not only with regards the armed struggle but also the social life of the people in the field, economic activities, factories, medical facilities and so on. Mr. Toni says “During my visit to the field that was the policy of the EPLF on self-reliance that impressed me more”.

combatants impressed him most and convinced himself that he wants to build strong relationship with Eritreans. For me he said “The Eritrean revolution has been a model and I had the strong belief that the revolution will come out triumphant and liberate the country. I had no doubt about that. And that was way back in 1977.” Since then Toni Locher had conducted several visits to the field.

Upon his return home to Switzerland Mr. Toni continued his contact with Eritrean nationals and initiated the establishment of Swiss Support Committee for Eritrea (SUKE) on 8 October 1977.

SUKE since its establishment had strong contact with the EPLF and has been sending, through contribution from friends of Eritrea and Eritrean national residing in Switzerland, variety of items they think would assist the revolution. And as Tone is a Medical Doctor, the items they have been sending have been mainly medical materials. And also other items of importance.

SUKE today has 30 active members, 150 non-active members and about 6,500 regular supporters. Fifty percent of the board of directors of SUKE are Eritrean nationals residing in Switzerland.

After independence the committee continued its relations and solidarity with the Eritrean people. Many of its members have frequently visited Eritrea especially during Independence Day celebrations.