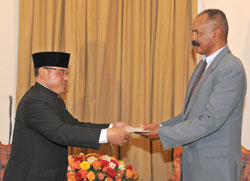 During the ceremony at Denden Hall here in the capital, President Isaias held talks with the Ambassadors regarding Eritrea’s achievements in the development and diplomatic arenas, as well as relations of partnership with the respective countries, and further wished them successful tour of duty.

The Ambassadors on their part expressed the readiness of their respective nations to develop mutual co-operation with Eritrea on the basis of partnership, including that of trade and investment domains, political and diplomatic activities and the like

It is to be recalled that President Isaias yesterday received the credentials of the Ambassadors of UK, Italy, Germany, European Union, Libya, South Sudan, Malta, Pakistan, Spain, Serbia, Canada, Norway and Tanzania.