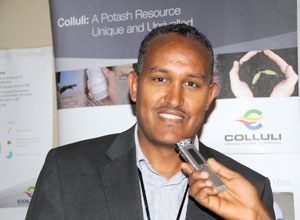 There have, of course, been a number of sites that harbor Eritrea’s natural treasures. Such wealth has by far been discovered in the post independence period. Bisha mining has become a key which opened the gate to the country’s natural resources. Zara mining which is nearing to start production has also become the next gold mine. Asmara Mining Project which covers mine sites in Dubarwa, Adi-Nfas, and Embaderho has ensured the sustainability of Eritrea’s booming mining industry.

Above all, Colluli, world class deposit of potash, has been under development. Thus, every national has been eager to see what such resources of exceptional quality would bring to the national economy. As described in the 5th Asmara Mining conference, the mine life of Colluli potash contains over one billion tones of potassium. In a joint venture owned by South Boulder Mines and ENAMCO, each of the two parties has a 50% ownership of Colluli Mining Share Company. What are the activities so far carried out? What are the advantages and unique characteristics of Colluli Potash? An excerpt from an interview conducted with Zeray Leake, Country Manager/ Chief Geologist of South Boulders Mines is as follows:

Give us an update about the activities that have already been undertaken and that are still underway?

Colluli as unique deposit, as a unique resource, as so shallow, as so close to the sea and the market, our initial strategy was to produce MOP(Muriate of Potash)- standard potash- which all major players produce. But, following the 2013 potash price decrease, we just revised our development path and thus we came with a different development strategy. Our new strategy is to stick on efficient utilization of resources. That is, instead of producing MOP, we planned to produce Sulphate of postash (SOP) which has a higher premium over MOP. The price difference between MOP and SOP is around 30% taking into account the already known market condition. If we take the current market price of MOP and SOP-SOP is almost double of MOP. Shifting from MOP production to SOP is highly important for all the shareholders including the Eritrean government.  With this outlook, we are revising all the processing designs and infrastructures (including accommodations and ports among others). It has been quite a busy year; we have been excessively busy to meet the time line and thus to finish the prefeasibility study by the end of this year (which will be in February next year) and the full feasibility study will be done by the end of 2015.

South Boulder Mines has decided to follow a modularity principle. How is this going to happen and in how many phases?

Modularity or phased devolvement is quite crucial for big operations. The current market is very tight and is also quite difficult to raise money.  The initial plan was to start with one million tons of MOP which needs a capital of USD 750,000,000 and it could even be close to USD one billion. Thus, raising that amount of money with the current condition of market is so tough. Hence, what we are intending to do is to start with SOP which has a higher price advantage. When we start with SOP, we are going to jump to a production of one million tons of potash.   But, we will rather start with smaller quantity which is going to be around 350,000 tons. The advantage of starting with a smaller quantity is that it gives an opportunity to be on production faster, to raise money easily, to train your people and develop their skill, and to manage risks in collaboration with experts of environmental protection. That is why we preferred to develop big project on modular approach. So, we are going to start with 350,000 which also could be around 400,000 tons. The second phase would be after around five years which will also be a double of the first production.

It has been described that Colluli potash has unmatched advantages over other potash mines cross the world. Would this have an impact in the growth of national economy?

It would definitely have an impact. For instance, Canada’s and Russia’s potash mines are 500-to- 1.5 km deep. Such underground mines demand an insertion of shafts which costs close to USD half million. So, being so shallow, being so close to international market coupled with other factors, the mining cost of Colluli potash would be hugely reduced and this would intern give us an opportunity to mine and process all the resources we have at a minimum cost. This is indeed a unique advantage for the company as well as for the country.

Could you also give us additional information about the plans South Boulder mines has mapped out to develop Anfile bay as a coastal gate to market places?

Anfile bay which is 75 km from our project site and 8 km north of Ti’o is a good place to build a jetty. The Eritrean government has already allocated us for the project. So, we are making environmental studies around Anfile bay. Besides, the project is going to be an open cut and thus it will give us an opportunity to export other products other than potash through Massawa while most of the potash will be exported through Anfile bay.

Quite early next year we are going to have financial model and we are going to revise the economics of the project at definite feasibility level. We are now excessively busy doing a couple of things. Finally, I would like to thank all the Government bodies who have been very supportive all the time.