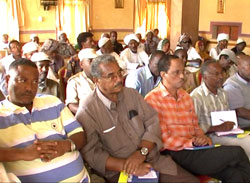 Reports indicate that a seminar with regards soils and water conservation has been conducted in Gelaolo and Ghinda sub-zones.

Massawa, 19 October 2014- Reports indicate that a seminar with regards soils and water conservation has been conducted in Gelaolo and Ghinda sub-zones.

The seminar in which officials from the Forest and Wild Animals Conservation Authority participated has been focused on forests and wild animals conservation and measures that have to be taken.

Mr. Abraha Garza, Head of the Forest and Wild Animals Conservation Authority, indicated that efforts are being made to establish national parks in different parts of the country, and that drafting of guideline and regulation is under process.

Mr. Eyob Zeremariam, Senior expert of forest conservation and development, indicated that the guideline and regulation would incorporate policy of existence of national parks, human development, administration of national parks and conservation of natural resources, developing of natural trees, judicious use of grazing lands as well as ensuring habitat for the wild animals.